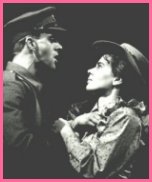 Dublin, Dra�ocht Centre for the Arts

Howard Goodall&#146;s musical adaptation of Melvyn Bragg&#146;s novel inspired by the life of his paternal grandfather has often been called "the English Les Mis." It is a story of the poor and downtrodden which foregrounds its political aspects and attempts to celebrate the struggles of ordinary men in women in a realistic rather than fantastical way. The drama takes place in the closing years of the nineteenth century and the first decades of the twentieth, encompassing the political and social sweep of the end of the Victorian era and the tumult of World War I. It follows the shift from agricultural to industrial labor and the rise of trade unionism, and appraises the effects of both on the working man.

The central character, John Tallentire (portrayed by John Sweeney), is a casual laborer who hires himself out to a farmer as the show begins in 1898. He and his young wife Emily (Jean Burke) are given a small cottage as partial payment for his services, and they begin their life together with great hopes for the future. Troubles set in quickly enough when John becomes so devoted to his labors that Emily feels neglected, and she sets her fancies on the dashing farmer&#146;s son, Jackson Pennington (Edward Brady). An affair ensues, threatening to permanently disrupt the fabric of their lives.

The second half picks up the threads years later when John and Emily have moved away from the farm to a nearby coal mining town. With two teenage children now, their lives have taken on a different rhythm. John works in the mines with his brothers and Emily has found relative peace in the routines of urban life. She has a job of her own, and though John risks his life daily, things are peaceful enough. The status quo is broken first with the onset of trade unionism, in which one of John&#146;s brothers is centrally involved, and then with the outbreak of the great war. What will happen to &#145;the hired man&#146;? Is the face of British society set to change forever, and with it the central characters&#146; understanding of life, love, and family?

The show was first staged in 1984, not long before Cameron Mackintosh&#146;s production of Les Miserables opened. Though not a significant success on its initial appearance, it has begun to find its way around local musical societies and to win notices in its own right in spite of the obvious comparisons which can be made with its younger but much bigger sibling. Ironically, Goodall wrote it because of his general distaste for musicals. He felt that their penchant for fantasy and escapism were deadening and wanted to write something which would have political and social meaning. It is significant, therefore, that it made its appearance at a time when British society was struggling to come to terms with changes in the political importance of the working class. Thatcherism was rampant and the now legendary miner&#146;s strike had shown the decline of people-power in the face of vested interests. Some of this material surfaces in this play, and something of the sense of the time is embodied in it despite its setting much earlier in the century.

On a musical level, The Hired Man draws upon the melodies of traditional British choral singing, and the show features a number of ensemble songs which sound like folk melodies, thus connecting its political and aesthetic dimensions. Though there is not much emphasis on dance, this production does feature a couple of communal dance routines and an opening and closing march featuring all of the cast which reinforces its social themes. The community and tavern scenes bring to mind the westerns of John Ford as celebrations of the roots of democracy in ordinary lives, and the simplicity of the music reflects an idealistic purity of expression representative of the world it attempts to celebrate.

The narrative doesn&#146;t always work. The second half covers far too much historical ground to ever get to grips with it adequately. The break between the early and later scenes is too great for smooth continuity and the psychological and emotional tension dissipates as the social stakes get higher (the war, the mines). These flaws in the writing may or may not impact upon individual productions. In this case they don&#146;t.

The Full Circle Theatre Company&#146;s inaugural production is entertaining and thoroughly professional in all respects. This group has been assembled using talent from a variety of long-established North Dublin musical societies, and it shows. The performances, sets, and music direction are all of an excellent standard and would not be out of place on a much larger stage in London or New York. Director Myra Maguire makes superb use of the stage at the Dra�ocht Centre for the Arts. She distributes her cast expertly to convey just the right sense of community. She shifts between busy scenes with many actors and more intimate moments between principals in a very natural manner. A simple range of props proves extremely effective in changing location and mood: a country wall becomes a sandbag bunker, a homely kitchen using the same wall as a fireplace becomes a lively tavern filled with music and song.

The set, designed by John O&#146;Donoghue reflects the same aesthetic economy. Its earthy tones and suggestion of patterns of light falling across the floor give the actors tremendous freedom to move but also keep them rooted in the action. The music is provided by an appropriately modest ensemble of only four players working under musical director Anne O&#146;Neill&#146;s guidance. They produce a suitably forceful but simple sound which does not overwhelm the voices of the actors or try to wring emotional responses from the audience out of sheer orchestration.

The quality of singing is generally very good. All three of the principals perform well, and each gets an opportunity for solo work which tests their range. They are also effective on a dramatic level, and though there are some character development issues stemming from the script itself, the actors manage a convincing level of characterization. The choral work on the whole is also of a high standard, and there are many good supporting turns, including Carol O&#146;Toole as Emily&#146;s best friend Sally and Todd Brothers and Robert Sinott as John&#146;s brothers, Isaac and Seth. Leona McEvoy and Alan O&#146;Neill have the rather thankless task of playing children. Though both perform well, neither is able to transcend the age boundary, which breaks the sense of realism upon which the rest of the play is founded.

For a production which such humble roots, this is a remarkable achievement. It sets an admirably high standard for musical societies. It is also gratifying that the show itself has continued to receive attention, because in spite of its shortcomings as a piece of storytelling it has worthwhile points to make about British society and does so in a relatively unsentimental and non-patronizing way.