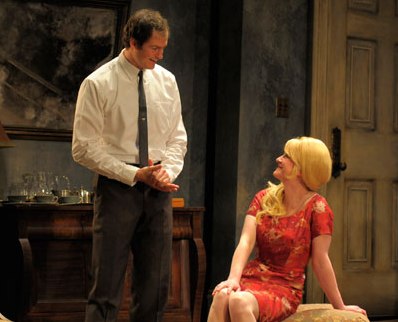 Home, they say, is where the heart is. They also say that it’s a place that, when you gotta go there, they gotta take you in. This folk wisdom may be true, but not necessarily if you’re a character in a Harold Pinter play. Home, in that case, might just be the most dangerous place to be. Or not. But that’s Pinter for you.

Full disclosure: While acknowledging his brilliance and influence on contemporary drama, I never have done well with the work of this playwright. The famous pregnant pauses; the cryptic comments; the overall aura of mystery; I confess all leave me dazed and confused. That said, I must report that Carey Perloff’s production of “The Homecoming,” dark, funny and impeccably performed at American Conservatory Theater, is as close to Pinter-perfect as you probably can get. Perloff, who also is artistic director of ACT, has a long history with the famed British playwright, who died in 2008. He was, she has written, the inspiration for her decision to go into the theater in the first place. Once established in her chosen career, she had the occasion to work personally with him, as she has with his contemporary, Tom Stoppard. So she knows her stuff. And she shows it in her deft direction of this show.

The plot is as simple as the emotions are complex. Four men live together in a dark, relatively shabby old house somewhere in London. Max (Jack Willis) is the alpha male. A retired butcher, he takes delight in chopping up his family as casually as he used to cut meat. His brother, Sam (Kenneth Welsh), an aging limo driver, takes his full share of the abuse but also knows how to hit back when necessary. There are two sons: Lenny the pimp (Andrew Polk), a slightly seedy sardonic man-about-town, and the youngest; and sweet, ineffectual Joey (Adam O’Byrne), who works on a demolition squad during the day and trains as a boxer at night.

Into this ménageà quatre enter Teddy (Anthony Fusco), the upwardly mobile eldest son, long since gone to America where he is a university professor, and his pretty wife, Ruth (René Augesen), who will become the fulcrum upon which the plot, such as it is, revolves. It’s all about power in this household, filled with essentially powerless men, and, while Ruth is initially victimized, especially by her uncouth father-in-law, who seems to take up all the air in the room when he is onstage, by the second act she takes the whip hand. Sex is her weapon of choice, and Augesen is a magnificent study in understated supremacy as she politely hands around the teacups and then lays down the rules by which they all will live together (sans her husband who heads back home). Or will they? In trademark Pinter style, one is never quite sure about the past, let alone the future. All that exists is in the moment and, at the moment when the curtain comes down, Ruth rules the roost.

Dan Ostling’s set design contributes to the claustrophobic atmosphere, the gloomy room with a long staircase in the rear, leading to imaginary bedrooms where unimaginable acts may or may not be performed. Costumes are by Alex Jaeger, and the atmospheric lighting by Alexander V. Nichols.

“The Homecoming,” for all its moments of levity, is not a feel-good play. It is disturbing—filled with unpleasant characters and unresolved situations. But it’s Pinter, after all, and prime Pinter at that, one of the classics of modern drama. And, at ACT, it’s given its due.