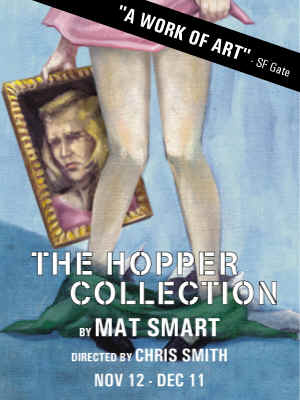 The Hopper Collection, a new play by a very young playwright, Mat Smart, is actually based on one painting by the American painter Edward Hopper, not a collection. The 1947 painting, "A Summer Night" shows a young man and woman standing outside, under a garish porch light, not talking. In a program note, the playwright discusses his starting point, the visualization of some kind of story between these two characters. Smart&#146;s version of the story, however, places the man and woman in present times, and makes the actual painting central to the plot. A wealthy middle-aged couple, the owners of a Hopper painting (never seen from the frontal view) have invited a young couple to spend a weekend with them, apparently on the basis of the young man&#146;s request to see this one painting before dying of a brain tumor.

In a one-act scenario not unlike Who&#146;s Afraid of Virginia Woolf?, with prescription painkillers taking the place of alcohol, there is a rampage, romance, deceits and revelations. All of this is appropriate to the classic conventions of an American play. If things don&#146;t quite hang together, it&#146;s not for a lack of trying. The performances at the Magic Theatre in San Francisco are strong. Julia Brothers, as the wife, a borderline maniac, is comically perfect, walking the line between caricature and menace. The husband, a boxer turned business tycoon who just wants a little affection, is played sympathetically by Andy Murray. The young visitors, creatures from Smart&#146;s own generation, with their own set of code words, quirks and complaints, manage to offer characterizations that go beyond the maudlin and romantic, and head towards actual ideas. If only the relationship between the two couples, and, for that matter, their fateful evening together, came together, or apart, more satisfyingly.

Hopper was known as a genius painter of darkness and light, presenting a particularly cinematic American version of loneliness and alienation that, in turn, inspired film-makers&#151;Hitchcock and the film, Psycho, the makers of Giant, Days of Heaven, Pennies from Heaven, and Road to Perdition. As a source for a play, on the other hand, where words are everything–not image, not color, not light–the choice of Hopper naturally leads to some huge challenges. Smart makes-up a quirky story to fill the space where before there was just a painting, but he never seems to reach the Hopper-style flatness, nor the stillness, nor the despair. These people are in motion, all over the place.

Smart&#146;s look at the conflicts of long-term love and disaffection seems off, unbelievable. It&#146;s a stretch to think that a young man (Smart recently graduated from an MFA program in playwriting at UC San Diego and has been receiving early national attention for his work) might be able to understand middle age well enough to present the blackest, saddest aspects of it.

Where other starting-out playwrights shock with new voices, screams from these difficult times, for Smart to look through the filter of a 1940&#146;s-era painting, and some forty characters, is risky, and perhaps futile. Being an outsider is expected of a playwright, of an artist, but in order to be able to articulate the tragic dimensions of human relationships you need a little inside information.

All the elements are there in The Hopper Collection; a theatrical imagination is clearly at work. May Mat Smart have more luck with his next work, now in progress, a rock musical version of Moby Dick.