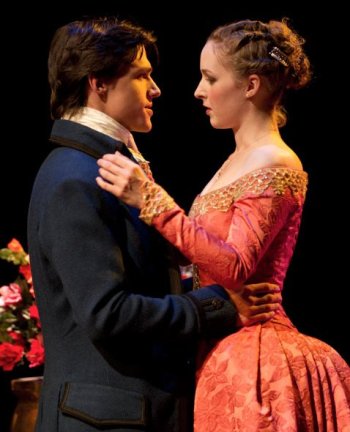 At the end of its extremely rich season devoted to the work of Tony Kushner, it’s hard to imagine how the Signature Theatre Company could top its excellent revival of “Angels in America” and its co-production, with the Public Theater, of Kushner’s latest magnum opus, “The Intelligent Homosexual’s Guide to Capitalism and Socialism, with a Key to the Scriptures.” But the deed has been done. The season comes to a smashing close this week with the final performances of “The Illusion,” a free adaptation of Pierre Corneille’s 1636 “L’illusion comique.” Commissioned and first produced by New York Theater Workshop in 1988, it is an elegant, densely poetic meditation on theater, magic, and love.

“The Illusion” is a curious play in that everything seems completely simple and clear when it’s over, but while it’s going on it feels quite strange and perplexing. You almost don’t know what you’re watching. This is a tribute to Michael Mayer’s super-detailed, characteristically inventive staging in collaboration with his powerhouse design posse (sets by Christine Jones, lighting by Kevin Adams, costumes by Susan Hilferty) and one of those dream ensembles that make going to New York theater an incomparable joy. They let the play unfold moment by surprising moment.

The story is easily described: a father whose sternness drove away his son now, 15 years later, wishes to reconcile and consults a sort of witch doctor to locate and return his prodigal son. And yet the spells that the magician Alcandre (Lois Smith) casts, with the help of her erstwhile deaf-mute Amanuensis (Henry Stram), to show the lawyer Pridamant (David Margulies) where his child has gone create multiple layers of storytelling. They, and we, watch as five other characters enact three different vignettes, changing names and allegiances each time, appearing and disappearing through the magic of theater, whose powers the skeptical Pridamant dismisses as “angel hair and fancy talk.”

All of this gives Kushner the opportunity to do that thing he does, which is run circles around any other playwright, dispensing epigrams and jokes and rhapsodic odes like some larky latter-day Shakespeare. A father, disapproving of his daughter’s choice of mate, discourses on love:

That hydra-headed gargoyle into whose foul maw
Everyone tumbles, giddily, each
With the same insipid look
Of sheeplike expectation.
Love, that sarcophagus,
Love that disease,
That demonic, black misery,
That catastrophe, Love.

Alcandre, countering Pridamant’s complaint that theater is a “sinister…black-magic reconciliation…no more substantial than a soap bubble,” suspends time and activity with her quiet disquisition:

“Oh not so sinister. What in this world is not evanescent? What in this world is real and not seeming? Love, which seems the realest thing, is really nothing at all; a simple gray rock is a thousand times more tangible than love is; and the earth is such a rock, and love only a breeze that dreams over its surface, weightless and traceless. And yet love’s more mineral, more dense, more veined with gold and corrupted with lead, more bitter and more weighty than the earth’s profoundest matter. Love is a sea of desire stretched between shores—only the shores are real, but how much more compelling is the sea. Love is the world’s infinite mutability; lies, hatred, murder even, are all knit up in it; it is the inevitable blossoming of its opposites, a magnificent rose smelling faintly of blood. A dream which makes the world seem…an illusion. The art of illusion is the art of love, and the art of love is the blood-red heart of the world. At times I think there’s nothing else.”

Who gets away with such luscious language? It’s not easy, but under Mayer’s direction these pearls drip unself-consciously from the mouths of Stram and Smith, respectively, although Peter Bartlett as the moon-smitten lunatic Matamore makes every line especially delicious, whether denouncing an interlocutor as “presumptuous homuncula” or recalling a fearful night in a creepy attic listening to “the screams of rodent agony.”

The quartet of young lovers could easily lapse into generic blandness, and yet they never do. Finn Wittrock has the toughest job of playing the handsome hero but does so with his surname’s cleverness and solidity, holding his own against the ever-superb Sean Dugan—the two of them have the kind of extended, expert, close-range fencing duel you hardly ever see anymore. And I loved how Amanda Quaid (daughter of Randy) and Merritt Wever sidestepped generic princess-and-maidservant posturing to chat for all the world like savvy intimates.

It’s another tribute to Kushner’s play that it invites creative casting. In the original production at New York Theater Workshop, the role of Alcandre was played by Isaiah Whitlock Jr., then a terrific young African-American actor who couldn’t be more different from Lois Smith, a veteran white actress from the worlds of Steinbeck and Horton Foote. The young folks were cast multiracially (and I think it’s great that Mayer didn’t feel obligated to reproduce that casting choice). And Stram’s role was first played by longtime Kushner cohort Stephen Spinella, in one of his earliest New York stage outings. I will confess that I relied on Google to refresh my memory about the original cast. Although I saw that production and wrote a short review at the time, I retain no particular details except that the most entertaining performance was that of Matamore (an actor named Arthur Hanket) and that it ended on a deliriously lyrical note. This production is dreamy from beginning to end. Catch it before it dissolves back into the ether.