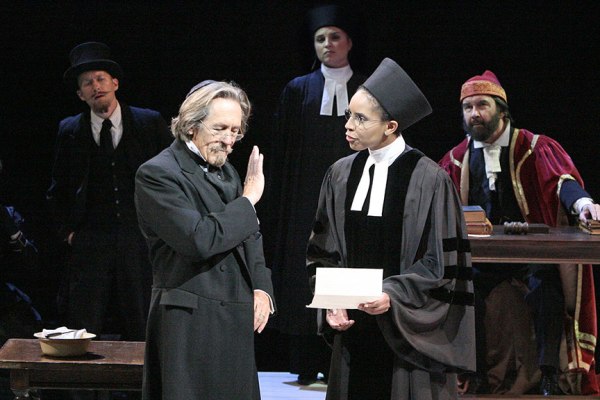 Michael Anderson and Krystel Lucas (foreground, left and right) in The Old Globe’s “The Merchant of Venice”
Photo by Michael Lamont

‘The Merchant of Venice’

Seeing “The Merchant of Venice” is like watching two plays at once: the one on stage and the historical context that comes with it. “If you prick us, do we not bleed?” Such a beautiful line, but born of such complete ugliness. Merchant is a window into 16th century values, and sometimes we’d rather not look through it.

Though classified as a comedy, there’s very little comedic about this play. Manipulation, a failed business, usury, anti-Semitism—it’s a cornucopia of bad feelings. Wanting to woo Portia (Krystel Lucas), Bassanio (Lucas Hall) requests a loan from his patron Antonio (Donald Carrier). With his money tied up in trade, Antonio must go for funds to the Jew Shylock (Miles Anderson). Seeing his opportunity for revenge after a lifetime of slights, Shylock demands a pound of flesh should Antonio default. Naturally, Antonio’s business interests go awry, and he defaults.

The characters are a lot like us, and we want them to be better. Antonio is arrogant, Bassanio is profligate and Shylock is just an asshole. Even his daughter Jessica hates him.

Though Shylock’s time onstage is relatively small, the character is the lynchpin, especially when factoring in all the baggage. Anderson performs Shylock with an emotionally damaged dignity. Cunning, bombastic, greedy—he has suffered “the slings and arrows of outrageous fortune,” and is eager to exact vengeance on his oppressors.

Anderson’s performance is a highlight in a show that otherwise comes off flat. This may be the fault of the play itself. There’s too much hand wringing to be comic and too little pathos to be tragic. As a result, it becomes more a technical exercise in various forms of debt collecting.

The rare comic flourishes are well-executed. Portia’s other suitors, the Prince of Morocco (Nic Few) and the Prince of Arragon (Christopher Salazar), are wonderful in their foolishness. And Triney Sandoval is endearing as the uncontainable Gratiano.

The set evokes a timeless Venice, where plank walkways keep citizens dry during periodic floods. Noble’s direction seems slow at times, particularly during the court scene. To his credit, he tries to level the playing field. Jewish greed is offset by Christian bloodlust and hypocrisy.

Perhaps, in earlier centuries, Merchant would have had more joy. If societal values say it’s okay to hate Jews, then maybe the show can be less restrained. Perhaps we can’t give it our full heft without somehow condoning anti-Semitism. The Globe makes a good attempt, but it’s hard not to tiptoe around such difficult issues.