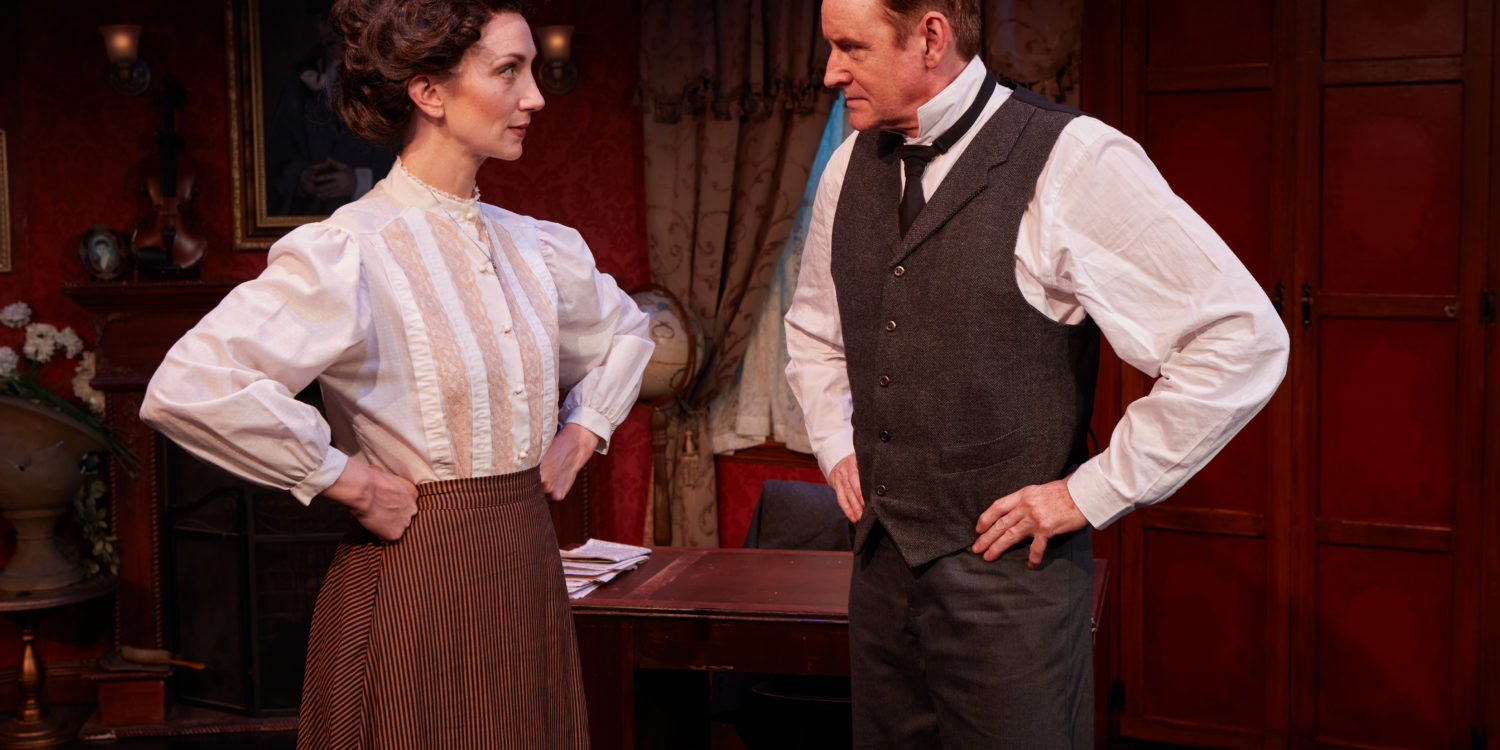 A World Premiere at the North Coast Rep

Sherlock Holmes is having an off day. Housekeeper Mrs. Hudson is in Glasgow visiting family and Dr. Watson is inexplicably absent from 221b Baker Street. Finding himself at loose ends, Holmes removes a pair of maracas from a desk drawer, confides to the audience that his ambition in life was to become a dancer and launches into a lively cha-cha. It’s an unmistakable clue that a zany evening awaits courtesy of the world premiere musical “The Remarkable Mister Holmes.”

But fear not, Holmes (Bart Shatto) quickly gets down to the business of sleuthing when Scotland Yard Detective Inspector Lestrade (Tony Perry) arrives with news of murder most foul at a posh hotel. What follows is a campy, comical tale – complete with red herrings, disguises, accents, stolen jewels, cups of tea and a growing body count – told through nearly two dozen songs by nine actors, many portraying multiple characters.

An intriguing story throughline find Holmes being bested by the inductive reasoning powers of Watson. No, not John Watson but Sheila Watson (Sharon Rietkerk is a gem in this role), the good doctor’s sister who has arrived in London at her brother’s telegram behest. Supremely confident, Sheila quickly inserts herself in the forefront of the investigation and just as quickly gets under Sherlock’s skin, as he finds himself having to compete with a woman whose cerebral abilities match his own. Shatto and Rietkerk are superb sparing partners as proper Victorian manners and polite banter do little to disguise the growing animosity between their characters.

Shifting through tantalizing clues, Sherlock and Sheila must at the same time manage the demands of the titled and entitled brother and sister Gustav (Phil Johnson) and Gerda von Schwanz (Katie Karel) and the hotel manager (David McBean) all of whom are in high dudgeon that the Hotel Magnificent is rapidly becoming a morgue. A cockney maid named Phyllis (Katy Tang) has her own mystery she is hoping to solve.

It’s an evening of escapism in which two characters manage notable escapes: Rabbi Plotkin (Andrew Ableson) evades the clutches of death and Mrs. Hudson (Deborah Gilmour Smyth), bound and gagged, earns some of the biggest laughs of the show by pulling off the most improbable escape imaginable.

Locations for all this action switches at a dizzying pace. Keeping up is set designer Marty Burnett who has constructed an array of tall, wheel-mounted cabinets that are fluidly propelled around the stage. Once in place, cabinet doors open with ease to reveal the red-flocked walls of Holmes’ study, a Versailles-worthy hotel interior or the dreary streets of 19th century London. Starched-collared, puffed-sleeve and precisely darted costumes by Eliza Benzoni are everything one could ask for.

The cast gives strong portrays and is versatile in handling the comic timing and physical humor the story requires. Their classically trained voices do justice to the songs; even those with groan-worthy lyrics. A sonorous solo by Tony Perry’s Inspector Lestrade pinned the audience to the back wall. Bravo.

In the wings, but very much present in the story, are musicians Amy Kalal, Jennifer Williams, Tom, Versen, and musical director Ron Councell who masterfully do their own juggling act of playing piano, flute, clarinet, alto sax, violin, viola and percussion.

The production is as ambitious – and at times as breathless – as this sounds and could benefit from the trimming of a subplot or a song or two.