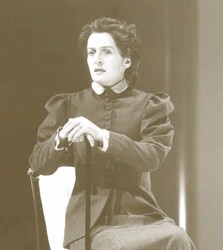 Constance Wilde was the wife of Oscar and mother of his two children. She died more or less unnoticed by the world at large in 1898 following an operation on her spine intended to relieve the pain resultant from a fall down the stairs of her home in 1895. That year was an auspicious one for the Wilde family, not least of all because it marked the first productions of Oscar’s plays, An Ideal Husband and The Importance of Being Earnest, but also the beginning of his metaphorical and physical trials at the hands of the British establishment. Oscar was famously convicted of gross indecency for various acts of homosexuality, though the case came to court primarily because of his relationship with Alfred Lord Douglas, whose father, the Marquis of Queensbury, took particular exception to it. Imprisonment would, for Oscar, mean many things, including the separation from his children imposed by Constance which persisted even after her death. His fall was her fall, only hers remains still largely unmarked by history.

The story of Oscar has been told many times, including most recently in the film Wilde, released in 1998. Kilroy’s play was first performed at the Abbey Theatre, Dublin that same year, but its take on the subject was from a decidedly different angle. Integrating the stories of Oscar, Douglas, and Constance with a mixture of fact and speculation, it is a study of the ‘fall’ of Constance Wilde on multiple levels. Just what was behind her decision to deny Oscar access to their children? Was it merely a knee-jerk reaction to his ‘debauchery’, or something deeper? How did Constance see herself and how did she see her husband and his lover in relation to herself? Was there, as the character of Constance remarks in the opening scene, a kind of "progressive paralysis" in their relationship representing a long, slow fall which began many years before? What was the nature of their marriage, especially given the seemingly contradictory way in which she supported Oscar financially through the years after his arrest but still denied him access to the children? How did the hidden world of Constance Wilde reach its equally forgotten end while leaving such an indelible mark on her husband? These and other questions are raised by this Abbey production, which returns briefly to Dublin before taking its place at the BITE: 00 Festival at the Barbican Centre, London.

The Secret Fall of Constance Wilde is a powerful and involving work. It is a complete work of theatre, mind, not merely a written text, a collection of performances, or an illustration of technical stagecraft. All elements of this production are beautifully integrated, from the mixture of puppetry, mime, and standard performance which tells the story, to the splendidly simple but surreal set designs by Joe Vanek and lighting effects by Nick Chelton which enhance, embellish, and inform it. David Bolger’s ‘movement direction’ of the voiceless, faceless chorus of ‘attendants’ who stand eerily still and silent or spring delicately into action to fulfil secondary parts in the action between the three principal characters is as important as Abbey veteran Patrick Mason’s direction of the production on the whole.

It concerns itself with, among other things, the schism between ‘truth’ and performance, and as the characters prepare to enact scenes from their own past as the play begins, Oscar recites lines from his own plays laced with a darker and deeper irony than is usually heard. It is a self-conscious theatre which does not try to impress its audience with its own cleverness, but rather finds a controlling metaphor in the theatre itself which dominates everything that happens on stage. This pays off particularly well with the use of puppetry throughout and especially at the climax in a coup de theatre which could not have been handled any other way.

Jane Brennan, Robert O’Mahony, and Andrew Scott are superbly matched as Constance, Oscar, and Douglas respectively. Brennan is a powerful presence at the center of the drama despite the inevitable attention appropriately commanded by the characters played by her co-stars. In the role of Oscar, O’Mahony is mostly dark and anguished, but this interpretation gives greater force to the bitterness of the quips and one-liners for which Wilde became famous, and which Kilroy turns on themselves and probes for grains of human truth. Scott is excellent as the alternatively prissy and hysterical Douglas, finding just the right note to make the character as much hero and villain as any of the others.

There are no easy answers here, and indeed the play begins with Constance’s revelation that her own ‘evil’ is as much part of the story as anyone else’s. The script draws upon known details of the characters’ lives and an endlessly fascinating hypothetical exploration of the dynamic of their tripartied relationship, and the balance of writing, staging, performance, and direction brings out the complexities and nuances in their relationships while exploring various themes of patriarchy, parenthood, masculinity, femininity, sexual identity, trust, betrayal, and a woman’s ability (or necessity) to determine her own destiny in the face of apparently dominant (male?) personalities.

This is a rich and exciting work of theatre which is destined to reach a wide audience not only on tour but as it begins to find its way to local production. In the two years since its first staging, it has already assumed the status of a classic of modern Irish theatre and patrons will find themselves challenged and exhilarated by this current rendition.

(19163)
$20.99 (as of January 21, 2021 - More infoProduct prices and availability are accurate as of the date/time indicated and are subject to change. Any price and availability information displayed on [relevant Amazon Site(s), as applicable] at the time of purchase will apply to the purchase of this product.)

(25286)
$22.81 (as of January 21, 2021 - More infoProduct prices and availability are accurate as of the date/time indicated and are subject to change. Any price and availability information displayed on [relevant Amazon Site(s), as applicable] at the time of purchase will apply to the purchase of this product.)

(2286)
$3.15 (as of January 21, 2021 - More infoProduct prices and availability are accurate as of the date/time indicated and are subject to change. Any price and availability information displayed on [relevant Amazon Site(s), as applicable] at the time of purchase will apply to the purchase of this product.)
related posts