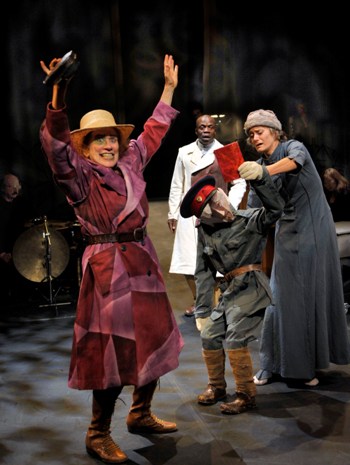 The words fable and fabulous have the same root. And Berkeley’s little Aurora Theatre is presenting a fabulous fable with “The Soldier’s Tale,” Stravinsky’s time-honored chamber piece about a soldier who tries to beat the Devil — and almost succeeds. Written in 1918, it is a delightful hybrid, mixing music, dance, acting and, in this case, a near-life-sized puppet, made by David Densmore, operated by retired San Francisco Ballet principal Muriel Maffre and voiced by L. Peter Callender, for years one of the shining lights of California Shakespeare Theater. What could be better? Well, how about Bay Area comic staple Joan Mankin, having a devil of a good time as the soldier’s nemesis?

The story of Joseph, a war-weary foot soldier who is on his way home to his mother and fiancée when he encounters a stranger (Mankin) who offers him a magical book in trade for his old violin, actually is based on an old Russian folk tale, a gentler variation of the Faust legend. The foreknowledge in the book makes Joseph rich; but riches turn to boredom. Besting the Devil at cards, he regains the fiddle long enough to serenade and win the King’s daughter (Maffre, who bursts across the tiny Aurora stage in just enough of a dance to make you long for the good old days when she was a regular feature of the ballet season). And then he is overcome by longing for his earlier life and former self. But you can’t have it all. Needless to say, it does not end well but the tale is told with such gentle humor and charm that you leave the theater buoyed rather than depressed.

The music—modern, jazzy and very listenable—is beautifully delivered by the ensemble Earplay, four excellent musicians (with some substitutions on certain dates), playing before and behind a gauzy curtain, stenciled with Chagall-like village houses. The highly workable stage design is by Benjamin Pierce, also a former San Francisco Ballet principal, now a filmmaker and set designer, who is Maffre’s life partner. A plank that leads from the upper level of the stage will lift up to reveal the bowels of Hell at one point. A box that holds a multitude of props, converts to a writing desk, a card table and just about anything else you might need while a single light bulb is lowered when required. Costumes, by Fumiko Bielefeldt, are simple and minimal for Maffre and outrageous for Mankin, whose Devil shows up in a number of guises. Callender wears a fanciful leather-trimmed trench coat that is just right. Sad-faced Joseph wears whatever suits the rags-to-riches progression of his life.

Directed by Maffre and Aurora artistic head Tom Ross, the performances couldn’t be better. Mankin hams up her Devil with glee and just a touch of menace; Callender’s narration is as engaging as Donald Pippin’s vernacular translation of the original French. But it is Maffre, who wraps herself around the puppet with a dancer’s grace, who commands the stage. She and the four-foot puppet become one and it is a wondrous sight to see. If you are going to dance with the Devil, you couldn’t wish for a better partner.