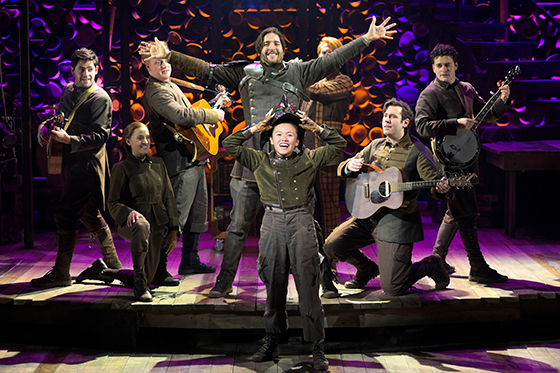 Some stories are so satisfying that they seem to live on and on, sometimes in different modes and renditions. Such a treasure is Kate DiCamillo’s Newbery Medal-winning 2003 book, “The Tale of Despereaux,” a charming chapter book geared for grades 3-5, but also relished by adults. It was made into an undistinguished animated film by Universal Pictures in 2008, then into a video game.

But finally, the whimsical spirit of the book has been captured in an innovative, creative musical by the acclaimed PigPen Theatre Co., an ingenious and versatile seven-person acting troupe and touring band, who wrote this production’s script, music, and lyrics, as well as co-directed it with the talented Marc Bruni (Broadway’s “Beautiful: The Carole King Musical”).  The cast is uniformly superb.

In a family-friendly 95-minute, intermission-less musical presentation, PigPen Theatre Co. recreates the tender and occasionally humorous story of Despereaux (played by the marvelous  Dorcas Leung), a tiny mouse with extra-large ears, whose mother was so crestfallen at his birth that she named him after the French word for despair. The mouse family lives in a castle in the Kingdom of Dor.

Despereaux, who prefers to read books rather than eat them, reads of a knight in armor who serves a beautiful princess. And so too, Despereaux yearns after the castle’s (human) Princess Pea (first-rate Yasmeen Sulieman). When the timid mouse steels his courage and dares to approach and actually speak to her against all the mouse rules, Despereaux is sentenced to die in the dungeon, which is populated by the mice’s enemy — rats.

While awaiting his death sentence, our reluctant hero meets the rat Chiaroscuro (outstanding John Rapson). His name is a joke since it is borrowed from the artistic term for combining and contrasting dark and light. Roscuro (his nickname) seeks light and not darkness, unlike the rest of the rats. The plot thickens with additional human and rodent characters, all of whom are seeking redemption for their misdeeds and failings. And being a fairy tale, the ending is a happy one.

The talented PigPen Theatre Co. members play guitars, keyboard, banjo, and percussion during the performance. The show’s 17 songs are all melodic, but 17 songs are a lot in 95 minutes. The tunes run together a bit so that none stands out in memory after one leaves the theatre. Since the songs sometimes further the story, younger children may not always be able to follow the plot. Reading the book with children before they see the musical would be helpful in any event.  Small puppets are occasionally used to represent the rodents, but they may seem more confusing than creative at times.

The Rep’s Roda Theatre has been imbued with a fanciful storybook setting by Jason Sherwood (Scenic Designer), with artistic lighting (Donald Holder, Lighting Designer) and inspired costumes (Anita Yavich Costume Designer), all of which help to capture the magic spirit of “The Tale of Despereaux.” It’s a terrific holiday show.