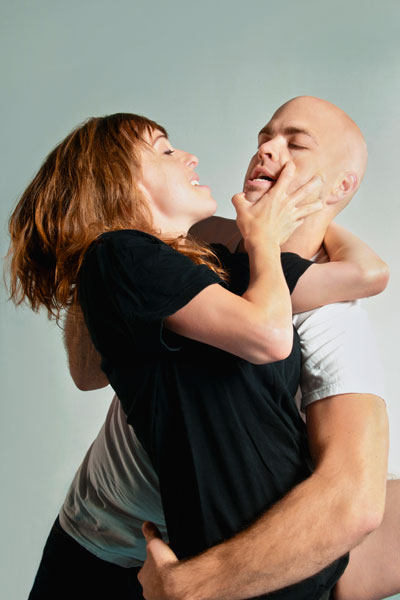 ‘The Taming of the Shrew’

“Come kiss me, Kate!” There’s a whole lot of kissing and yelling and conniving, as well as wooing, in the new “Taming of the Shrew” at CalShakes. Shana Cooper’s exuberant production of the classic comedy, updated to the go-go 1970s or thereabouts, is as funny as they come; fast moving; a thoroughly enjoyable night of theater.

The tale of Petruchio, a newly impoverished nobleman who comes “to wive it wealthily in Padua,” and the ill-tempered Kate, his bad-tempered unwilling bride suits itself to broad comic acting and this cast of rather broad comics does it proud. First the shrewish broad of the title: Katherine, the eldest daughter of a merchant of Padua who doesn’t know when to keep her mouth shut – or if she does, doesn’t care. Erica Sullivan is tart, quick and extremely energetic in the part. She even manages to put across Kate’s problematic speech at the end, where, as a rather hastily reformed troublemaker, she lectures the other women on the duties of a submissive wife.

But she’s not the only girl in town. Leggy Alexandra Henrikson plays her beauteous and sought-after sister Bianca, who cannot wed until the older Kate is settled down. Bianca is a cross between an airhead and a Barbie doll and her father’s favorite. She also is cleverer than she appears with a wide passive-aggressive streak. The relationship between the sisters defines sibling rivalry. Both actresses are graduates of Yale School of Drama, as is Slate Holmgren, the male lead. Holmgren’s Petruchio is a force of nature: blustering, brawling, chewing up the character’s speeches and spitting them out with relish. Some of his scenes with Kate are so physical (movement by Erica Chong Shuch) that one wonders which actor has more bumps and bruises at the end of the night. But even in their rowdiest moments there is a subtle sexy chemistry between the two. They are a match in more ways than one.

Bianca’s suitors are a motley crew of clowns: Liam Vincent in a succession of lunatic costumes (by Katherine O’Neill) as Hortensio; Danny Scheie doing a weird imitation of a Chicago gangster as the older Gremio; Nicholas Pelczar as the scholar Lucentio and Dan Clegg as his servant Tranio, sent to woo the lady from the outside while his master sneaks into her affections in disguise. (He wins them too but, by the end of the play, when beautiful Bianca turns into a shrewish herself, one wonders if he has won or lost). Fine funny business also is provided by Dan Hiatt as a servant and the always-reliable Joan Mankin in a variety of small roles. Rod Gnapp is a dignified Baptista, father to Bianca and Kate.

Scott Dougan’s set is a sleek modern split level for Baptista’s house and a virtual hovel for Petruchio’s honeymoon suite. Music—including a number from Cole Porter’s “Kiss Me Kate,” a latter-day take on the tale—is well chosen. Especially the final selection, the Shirelles’ “Will You Still Love Me Tomorrow.” Good question.