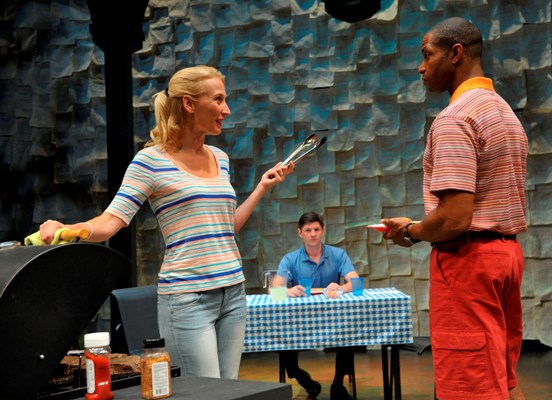 From left, Carrie Paff, Gabriel Marin and AldoBillingslea in “This Is How It Goes”
Photo by David Allen

‘This Is How It Goes’

“This Is How It Goes” or maybe not. Neil LaBute’s triangular affair, now playing at Aurora Theatre in Berkeley, has more twists and turns than a medieval castle. It’s about truth and lies; love and betrayal; race and class differences, and it’s a provocative roller coaster ride that may leave you a little dizzy at the end – which I can’t disclose without ruining the fun.

LaBute (“Fat Pig,” “Reasons to Be Pretty”) seems to be into appearances in all of his plays. Here, the appearances are obvious. Belinda (Carrie Paff) is married to the only black man in town, a high school track star and now the closest thing their Midwestern burg has to a tycoon. It was a love match – or so it seemed – in the beginning, but now Cody, the husband (Aldo Billingslea) is bored with her and has turned abusive, verbally and, on occasion, physically as well. Belinda suffers – not always in silence – and revenges herself at the shopping mall.

Enter the Man (Gabriel Marin, who is never given a name, just as Belinda and Cody’s children are sometimes heard but never seen). Actually, the Man enters first and, describing himself as “an unreliable narrator,” tells us the story of running into Belinda, on whom he has had a crush since high school days, one day after his returning to his hometown. She doesn’t really remember him that well – except that he used to be fat – but is delighted to have a new friend. Before you know it, the Man is renting the apartment above her garage and mowing the lawn in return for a rent reduction. One day Belinda brings him a glass of water, he drops the rake, there is a passionate clinch and, after that, all hell breaks loose.

Or so it seems. The Man is an aspiring playwright and admitted fabulist so, in all fairness, we sometimes see two different versions of whatever scene he is describing. LaBute, always the provocateur, has a lot of fun playing with our perceptions of reality. Sharply directed by Aurora head Tom Ross, his play becomes a fun house of distorted mirrors and mazes in which the truth can easily be lost.

The play also deals also with race – and not in a very comfortable way. Billingslea is masterful in his handling of Cody’s bluster, which covers a deep sense of vulnerability. He’s rich, he’s powerful, he’s strong but he still wants his daddy’s approval – and that of the town. Marin’s character, on the other hand, seems like a nice guy, chattering on about this and that, but is he really the villain of the piece? And what about Belinda, the putative victim? Is she really so innocent? Why did she marry Cody in the first place, alienating her parents and causing something of a scandal on Main Street?

Well, you’re not going to find the answers here. Just know that “This Is How It Goes” is one well-acted, thought-provoking piece of theater. Best to see it before it goes.