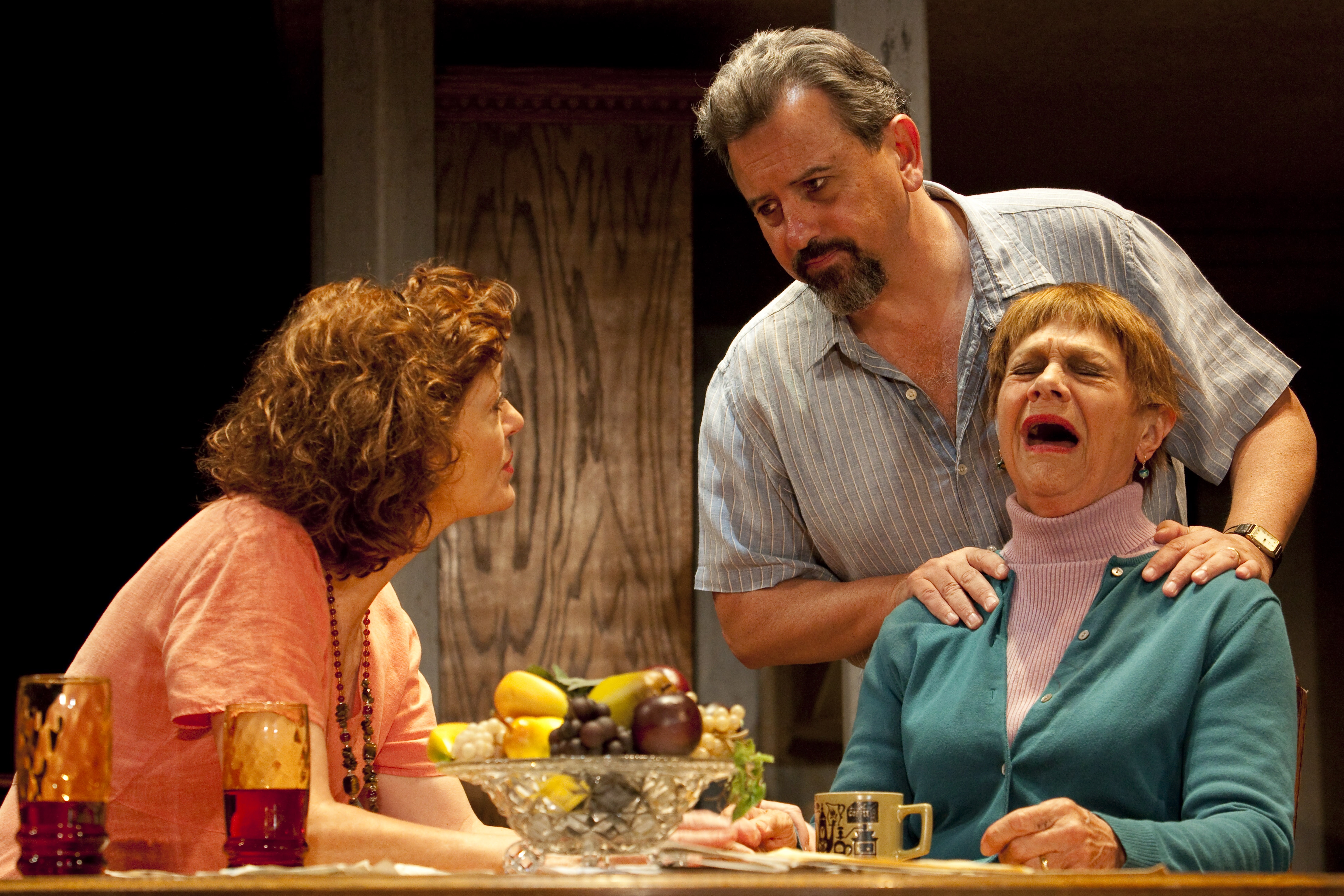 It’s arguably the funniest tragedy this side of “Godot” – or the saddest comedy.
Take your pick. But I guarantee that the long-awaited West Coast premiere of Tracy
Letts’ August: Osage County will not leave you cold. Letts plays audience emotion
like a concert pianist on a Steinway grand. Except for an infrequent use of the soft
pedal. It also is unlikely that this show will put you to sleep, in spite of its
more than three hours length. Everybody is yelling too loud. In fact, like the
reviewer, you just might develop a slight headache by the end.

“August” began life with Chicago’s famed Steppenwolf Ensemble (of which Letts is a
member) in 2007. It was a hit and went to New York where it scooped up five Tony
Awards – including Best Play – and a Pulitzer the following year. When Tony Best
Actress winner Deanna Dunagen dropped out of the Broadway production (claiming
exhaustion, and for good reason), the redoubtable Estelle Parsons took over the
role. It is Parsons who, at 81, anchors the touring version as the outspoken,
pill-popping matriarch of an Oklahoma clan that defies the term “dysfunctional.”
Parsons’ Violet Weston would be a bravura turn even for an actress half her age. As
it is, it is an astonishment. When Violet is zonked out on her meds she is an
incoherent zombie. When sober, her tongue cuts through her children’s hopes,
illusions and pretensions like a buzz saw.

Beverly, her husband, quietly well-played by Jon de Vries, opens the play with a
long, liquor-sodden monologue, punctuated by quotations from his favorite poets. He
too is a poet, having published an acclaimed volume some 30 years earlier. He has
spent the ensuing time drinking and putting up with Violet’s rants. Following his
speech he walks out, not to be seen again until the curtain call.

Dad’s disappearance is the occasion for a gathering of the clan: Violet and
Beverly’s three daughters, assorted love interests, a grandchild, Violet’s loudmouth
sister and long-suffering brother-in-law and the local sheriff (Marcus Nelson) who
is investigating Beverly’s disappearance. The ensuing series of confrontations,
confessions and revelations unearths an explosive minefield of addiction,
infidelity, disappointment and heartbreak, with a touch of incest and pedophilia
thrown in for good measure. It’s a bit over-the-top but almost everybody will
recognize something or somebody from their own experience.

In addition to Parsons, outstanding performances are delivered by Shannon Cochran as
the oldest daughter upon whom both the family blessings and curse will fall; Jeff
Still as her estranged husband and Emily Kinney as their precocious, pot-smoking
daughter; and Paul Vincent as the decent, patient Uncle Charlie who loves his
not-too-bright son (Stephen Riley Key), puts up with his non-stop talking,
judgmental wife (Libby George) and finally explodes to the audience’s delight. The
large cast also includes the two younger daughters: Ivy, the old maid (a very good
Angelica Torn), and flighty Karen (Amy Warren). Lawrence Lau plays Karen’s fiancé
and DeLanna Studi is the sympathetic family maid-of-all-work. Anna D. Shapiro
directs, as she did in New York where she won a Tony for her work.

In spite of all its plaudits and Parsons’ splendid performance, I did not love
August: Osage County (although I expected to). It’s too long, too loud, too
fraught with emotions and angst. And no way could all of those awful things happen
to one family in one week. That it also is very, very funny just seems to confuse
things. The Weston house is so hot that tropical birds drop dead of heat stroke. But
Violet Weston’s heart is so cold you can feel the chill back in the 16th row.
Perhaps what this play needs is a thermostat in order to reach a more comfortable
and realistic temperature.