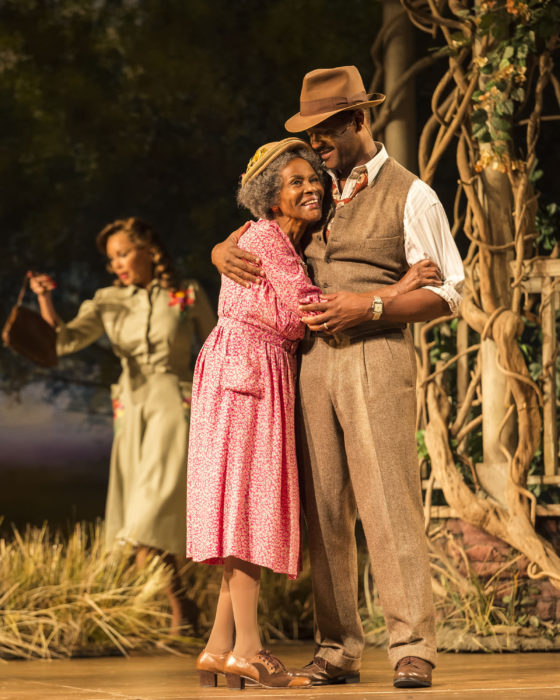 “The Trip to Bountiful” is an old-fashioned story mounted with old-fashioned style. Not that that is all bad. It is what passes as a classic in the 21st century. Horton Foote’s first iteration of this memory tale was as a television drama in 1953. Quickly, he fleshed the story out and it became a Broadway hit with Lillian Gish. In 1985, Geraldine Page received an Oscar as the lead in the movie version. The story definitely has had legs, and Carrie Watts is a character with allure to an array of actresses. Cicely Tyson saw the movie and told her agent, “You get me my trip to ‘Bountiful’ and I will retire.” Lucky for us, the part was 28 years in the getting. Tyson, now 81 years old, has continued to work and has matured naturally into the role.

For 20 years Carrie has lived with her son (Blair Underwood as Ludie Watts) and daughter-in-law (Vanessa Williams as Jessie Mae Watts) in a Houston two-room apartment (realized with fussy detail by scenic designer Jeff Cowie). Ludie has recently recovered from a two-year illness and is now back at work. Jessie Mae is vapid and vain, fussing over getting to the beauty parlor and annoyed at her mother-in-law’s incessant singing of hymns. She and Ludie are dependant upon Carrie’s pension checks to bridge the gap between his paycheck and the rent. Jessie Mae frets about Carrie’s possibly hiding the check to finance a trip back to her hometown of Bountiful. Carrie has fantasized the town into a fairy tale of warmth and support based mostly on an annual Christmas card she receives from an old friend. It is nostalgia for a lost time of small-town America that may never have existed.

Sure enough, next scene, next morning, there is Carrie in the Greyhound bus depot trying to buy a ticket home from the confused ticket agent, who says there is no stop in a place called Bountiful. She pulls the name of a neighboring town through her Vaseline coated memory lens, buys the ticket with loose change, and befriends a young woman, Thelma (delightfully played by Jurnee Smollett-Bell). The final scene of Act I is comprised of Carrie and Thelma chummily nestled in the back of the bus, Carrie confiding that she never loved her husband, but her father forbade her to marry the man she did love. As so often happens, a person outside an old person’s family finds it so much easier to appreciate their charm and overlook their quirks. Foote, who grew up in this part of Texas, had an unerring ear for the tone and the characters.

Does Carrie finally get to Bountiful? Of course. Does it match her memory? Not by a long shot, but she appreciates the old house and the Texas landscape surrounding it, realizes it will probably not survive the next storm, sadly but warmly reunites with her son and, not quite so warmly, with her annoyed daughter-in-law to meekly return to Houston.

In a strange quirk of programming, the Center Theatre Group is simultaneously mounting two plays dealing with two very different old ladies, their memory issues, and the dynamics that play out in their families around the issue of their decline. In 1953, especially on television, anger was written without profanity. “The Trip to Bountiful” is a script that now might be a trifle tame for Lifetime drama, but in its day it worked. The underlying themes are not dated.

The touring production at the Ahmanson is meticulously directed by Michael Wilson, if not especially inspired. It is not a stretch to imagine the Watts family as African-American. But sadly, as has happened before, “Bountiful” is a small story swallowed by the ungainly Ahmanson venue. Judging by the responsiveness of the audience in the lower section of the orchestra, there was much to recommend this production if you could snag a seat in the first 15 or so rows. What does shine through is Cicely Tyson’s old-fashioned mastery of the stage.