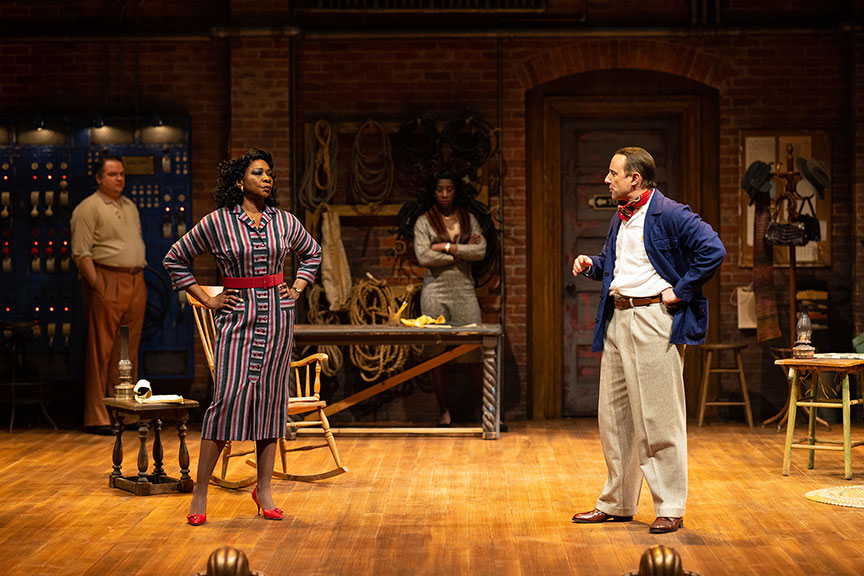 Early on in Trouble in Mind, veteran actress Wiletta Mayer (Ramona Keller) sits down with newbie John Nevins (Michael Zachary Tunstill) to give him a few tips on being Black in the theatre. Her advice is simple: Laugh at the jokes; never argue with the bosses; do as your told.

Set in a Broadway theatre in 1957, Trouble in Mind is a play about racism, during which actors rehearse a play about racism. Written in 1955, the show was only produced on Broadway in 2021, because…racism. Kudos to the Globe for bringing it to a wider audience.

Wiletta’s motherly advice to John offers a stark window into the world she’s inhabited for more than 20 years. We can easily imagine her getting slapped back for saying too much during previous productions. John is a little wet behind the ears, and she’d like him to understand the subtext. She wanted to be an actress.

The play within the play, called Chaos in Belleville, recounts how John’s character is lynched after fighting for voting rights. Chaos is rooted in stereotypes. Bill is the proud white father who tries (a little) to find a nonviolent solution, while subservient Blacks whittle on the front porch and sing to drown their sorrows.

The Black cast members are fed up, but don’t share their misgivings with director Al, an ill-tempered tyrant played with insecure bravado by Isola. They recognize the uncomfortable similarities between their theatre plantation and the one in the play.

Keller is a force of nature and carries the entire production, start to finish. Her Wiletta recognizes the wisdom of holding her tongue, but she’s been relegated to “mammy roles” for decades and enough is enough.

Trouble in Mind is at its best when Wiletta and Al verbally spar. The two have a long history that each interprets differently. However, the play loses steam when a variety of loose threads never get picked up. Sexual harassment makes a 30 second appearance and disappears. Rumors that Al might be an Elia Kazan-style snitch are brought up and quickly dropped. A violent incident is dramatically told and completely forgotten.
Except for Keller and Isola, the rest of the cast has little to do. Sears shines momentarily as genteel racists: Bill and the character he plays. Millgard’s Eddie is persistently abused by Al, but doesn’t get to react. Millie, Sheldon and John spend most of their time shushing Wiletta.

Had it been produced in 1955, Trouble in Mind would have been an incredibly powerful play, but now it seems like a time capsule, with the dramatic reveals being both obvious and naïve.

There’s no doubt the themes are still timely. The same day Trouble in Mind opened at the Globe, California’s civil rights agency sued Tesla for rampant workplace racism. But in 2022, when Black Americans are still gunned down periodically and the phrase Black Lives Matter is oddly controversial, the play seems inadequate.