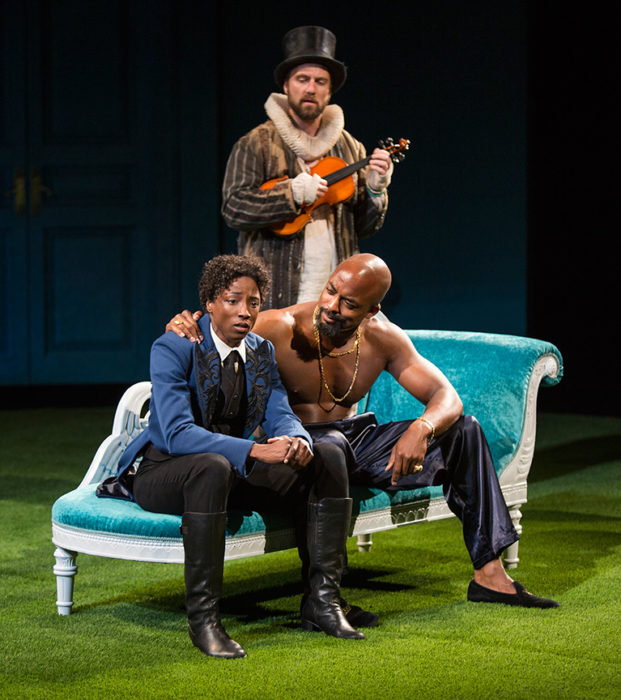 “I've noticed a tendency for this program to get rather silly. Now, I do my best to keep things moving along, but I'm not having things getting silly.”
— “Monty Python’s” Graham Chapman as the Colonel

We often laud Shakespeare for his intense drama, bitter conflicts and deep thoughts, but there are times when his shows are just plain silly. “Twelfth Night” is a perfect example.

Viola (Rutina Wesley) is shipwrecked, losing her twin brother, Sebastian, to the sea. She sets off for Illyria, where she masquerades as a man, Cesario, and joins the court of Duke Orsino (Terence Archie), who quickly takes him/her into his confidence.

Orsino is having love troubles. He is courting Olivia (Sara Topham), who has recently lost both her father and brother and is simply not interested. But Orsino won’t be put off and sends Cesario to convince her of his earnestness. Cesario/Viola falls short but inadvertently succeeds in making Olivia fall madly in love with “him.”

With all this comedic mayhem, it’s hard to pick favorites. Certainly, the four fools are in a class to themselves and Kerr, in particular, lights up the stage, though some of the credit goes to David Israel Reynoso’s costume design. But the big surprises come from Topham’s Olivia, who joins the clowning through sheer force of will and creative elocution.

Taichman gets full credit for making this zany ensemble work: excellent comic timing and broad flourishes serve the silliness nicely. The minimal set, with its AstroTurf and weeping angel image, mostly stays out of the way, though the mini moat is good for an occasional pratfall.

On opening night, during the final song — “Hey ho, the wind and the rain” — the audience witnessed the rarest of occurrences: a June drizzle in San Diego. Even the gods nodded their approval.