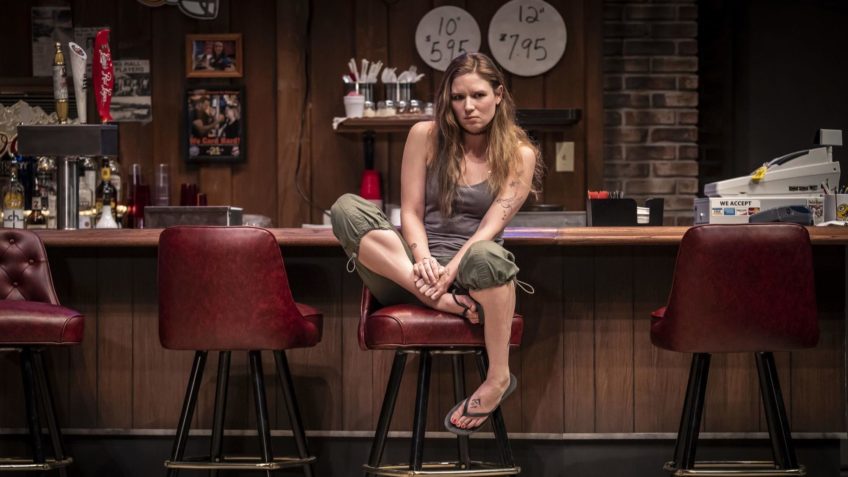 Four young women in a small-town Wisconsin bar, with a bowling alley beyond. It’s a story of their lives, their sorrows, their limited futures. Bowling is a side activity for most of them, but for Sam (Becca Savoy), it’s a college scholarship to a major university and an escape route to another life.

The play is Twilight Bowl by Rebecca Gilman, in a world premiere at Goodman Theatre, directed by Erica Weiss with an all-female cast and crew. Bowling is a backdrop throughout—the sport is a symbol of the working class life these young women dream of escaping or are complacent about.

The bar is like many you’ve seen if you’ve ever lived or spent summers in Wisconsin (and the whole atmosphere reminds me of Gateway Bowl at North and Narragansett avenues, where I basically grew up, since my parents were avid bowlers). Regina Garcia’s scenic direction creates this atmosphere perfectly. The bar fronts a bowling alley but the bowling is all off-stage and occasional. What really happens in Twilight Bowl are the relationships among these young women over two years’ time as they grow into adulthood with adult worries and responsibilities.

The play is a series of five scenes with different pairs or groups in each. Not much happens, but whatever happens happens as they sit at the bar or small tables. The play opens with a party for Jaycee (Heather Chrisler). There are gift bags and stories from her friends to send her off (including a very funny story about the poison ivy attack she suffered after a careless nature adventure). After a while you realize this is a happy-going-to-prison story; Jaycee will spend the next two years incarcerated for helping her dad sell bootleg pain meds.

Clarice (Hayley Burgess) cleans motel rooms and Sharlene (Anne E. Thompson) works at a retirement home. They all drink and smoke (except for Sharlene, a religious girl) and wonder if their lives will always be tied to this small town or another one nearby. A trip to Madison falls into the category of travel. Only Sam has the drive to move on to another world. Brielle (Mary Taylor) is a Twilight Bowl bartender who had a brief fling at college at UW-Platteville. Also in the mix is Maddy (Angela Morris), a college friend of Sam’s; she’s from Winnetka, which seems like another planet to the others.

The six actors have all created their characters with relish but their vocal ranges were limited and some of the dialogue was lost to those sitting in the rear of the theater. Weiss’ direction could address this; she’s known for her skill at bringing female voices to the stage. Original music and sound design are by Victoria Deioria with lighting design by Cat Wilson and costumes by Izumi Inaba.