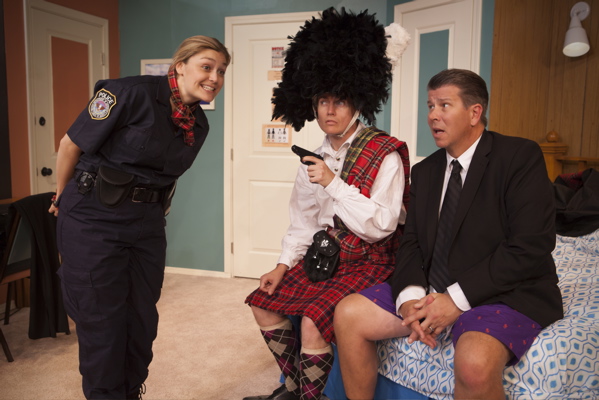 To the pantheon of iconic stage characters — Hamlet, Willy Loman, Blanche DuBois — I nominate Todd, the Scottish hit man who will slay you in more ways than one in “Unnecessary Farce,” on stage at the North Coast Repertory Theatre.

The setup is a dim light bulb of a mayor (Ted Barton) suspected of embezzlement, a female accountant whistleblower (Jessica John Gercke) with raging hormones, two utterly unskilled undercover cops (Christopher M. Williams and Jacque Wilke), a video camera, adjoining hotel rooms, and a tray of donuts. At the outset, the in-one-door, out-the-other shtick by playwright Paul Slade Smith unfolds in amusing formulaic fashion. Joining the ride is a city hall security guard with divided loyalty, Agent Frank (John Nutten), who warns everyone to back off lest they incur the wrath of the local mob known as the Scottish Clan.

Hold on to your seat as hit man Todd (David McBean) takes the stage and full command of the story. Todd is a professional, albeit with quirks. Before whacking people, he dons a kilt and plays the bagpipes (which is enough to drive some victims to take their own lives). He also has a short fuse and when angered his already hard-to-decipher brogue escalates like a 45-single record played at 78 rpm. He could not be more unintelligible if he were speaking Klingon. The effect is uproarious.

Director Matthew Wiener keeps everything on an even keel, even when the pacing, physicality, and pratfalls approach breakneck speed. The mirror-image hotels rooms, courtesy of scenic designer Marty Burnett, provide nearly a baker’s dozen of doors that propel the story along its merry way by opening, closing, slamming, and locking in near military fashion. Even the props score a laugh as we gaze upon the loud bedspreads and pedestrian artwork endemic to down-market hospitality chains, selected by the keen eye of Benjamin Cole. Sound designer Melanie Chen shoots and scores with the boisterous bagpipes and that unique telephone ring that screams Motel 6.

Costume designer Alina Bokovikova shows restraint where needed in the spit-and-polish police uniform and Men’s Wearhouse jackets and ties of the mayor and Agent Frank. The hot-to-trot accountant sports an overly tight tailored suit that advertises her assets. While remaining true to Todd’s Highlander garb, Bokovikova’s playful exaggeration of the sporran, argyle socks, and teetering bearskin hat is enough to launch another wave of belly laughs.

More capering, missed clues, and another round of donuts culminate with a “the hell, you say” surprise courtesy of the unassuming mayor’s wife, Mary Meekly (Dagmar Krause Fields), who turns out to be quite a dame. Fields plays her to the hilt. Who says there aren’t interesting roles for women actors of a certain age?