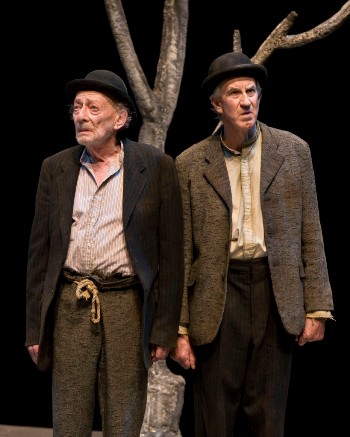 What are you waiting for? If you have not yet gotten tickets for “Waiting for Godot,” waste no time. Although Godot himself may never arrive (actually it is certain he never will), his acolytes will leave the Taper on April 22, and you will probably be sorry if you have missed them. You may have seen Samuel Beckett’s gem on the human condition in your 20s and felt intellectually smug, but seeing it again with some more years straining your belt is a different experience. Many a breakthrough work of art spawns progeny that eclipse it, but “Waiting for Godot” is a classic that has held its own.

Estragon (Alan Mandell) and Vladimir (Barry McGovern) are the veterans of a 50-year-long relationship. It is hard to imagine two actors who could better communicate the ever-warming patina, the never-ending irritations, and the inherent strength of a very long relationship. The two threadbare men are on a barren but ill-defined plateau — a jaundiced view of life, perhaps — waiting patiently and impatiently for he who never comes and perhaps never was. And if he were, what could he do for these hapless souls anyway? Vladimir observing Estragon rubbing his foot says, “There’s man all over … blaming on his boot the fault of his feet.” Pozzo (James Cromwell), a paragon of pomposity and arrogance, gallops through with his slave, Lucky (Hugo Armstrong), on a long rope, stooped over with a suitcase in one hand and a picnic basket in the other. Pozzo expects to world to be always there at his beck and call.

To belabor the story is to miss the point of the absurdist exercise. Beckett’s genius is his ability to entertain and comment widely while still illustrating the inherent weariness and challenge of existence. Michael Arabian’s direction strikes a perfect chord. He does not go for slapstick, nor is the audience hit over the head with philosophical challenge. Rather, pearls of wisdom and conundrums come floating past at dizzying speeds. I doubt Beckett could have wished for more.

Unlike the Taper’s previous production, “Clybourne Park,” “Godot” takes full advantage of the jutting stage and the semi-circular format. Every word is crystal clear, despite the characters’ gentle accents, and no audience member is likely to feel cheated.

It is a marvelous opportunity to see 84 year-old Alan Mandell at the top of his form. He is world weary, but ready to branch out and explore the unknown. He can be hopeful and hopeless in a single breath. This is a performance that would certainly have earned Beckett’s stamp of approval.