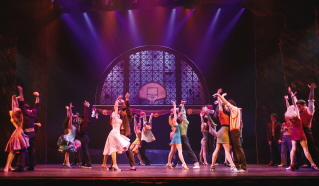 Back in the day when musicals had happy endings and singers weren’t miked, a theatrical dream team— the composer Leonard Bernstein, the lyricist Stephen Sondheim, writer/director Arthur Laurents and choreographer Jerome Robbins— undertook to transpose Shakespeare’s “Romeo and Juliet” from the squares and palaces of Renaissance Verona to the mean streets of New York. And musical theater was never again the same. Robbins’ high-energy choreography, Bernstein’s percussive, distinctive score and a book that encompassed gang violence, passionate love and three murders changed the face of Broadway forever.

But a lot of water has passed under the Brooklyn Bridge since then. When Laurents, now in his 90s and, with Sondheim, the last survivor of that original collaboration, directed the New York revival a couple of years ago it was greeted ecstatically. The big gimmick was having the boys of the Puerto Rican gang and their girls speak and sing in Spanish. Now comes the touring company, re-directed by David Saint with “reproduction choreography” by Joey McNeely, and enthusiasm rather than ecstasy may be the operative word.

For those who were not around in the 1950s and ’60s, the experience will be a welcome introduction to one of the classics of American theater (although they may wonder why the line “stay cool boy” isn’t “chill, dude” and what would have happened if Maria, the heroine, had simply called or texted her boyfriend on his cell to say she would be late). For those of us who remember the original, this revival can seem a little pale in comparison; the Spanish segments simply annoying (unless you speak Spanish) and the hipster references hopelessly dated. But then there is that dancing, burning up the stage, whether it is the mambo at the school gym or the gang rumble under the freeway overpass. And the two big comic numbers, “America” and “Officer Krupke” remain standouts, as evidenced by the huge ovations they received. Moreover, the parallels to Shakespeare’s “star-crossed lovers” come through loud and clear, from the early chance meeting at a dance to the miscommunication and its tragic consequences at the end. I missed the connection of Doc (John O’Creagh), the kindly neighborhood druggist, to both Friar Lawrence and the apothecary first time around. This time it was obvious (perhaps due to having that many more productions of “Romeo and Juliet” under the critic’s belt).

Anita (Michelle Aravena) steals the show, as Chita Rivera did before her in the original and Rita Moreno in the film. Ali Ewoldt is a pretty and appealing Maria, her “I Feel Pretty” a bilingual delight, but her duets with Tony (Kyle Harris) are a bit less so. That may not be her fault. Harris, although good looking, with impressive acting chops, seemed to be having vocal difficulties on opening night. Especially in the first act, his voice actually cracked on the high notes and he appeared to be engaged in a tempo struggle with music director John O’Neill’s orchestra. His voice did not always blend well with Ewoldt’s, but you had no doubt that these were two teenagers in love.

German Santiago was a sexy, powerful Bernardo, head of the Latino Sharks, and Joseph J. Simeone was an energetic Riff, chief of the Jets and the counterpart to Shakespeare’s Mercutio. Alexandra Frohlinger made a lovely Anybodys, the tough and vulnerable tomboy who longs to be a member of the Jets. Her solo, “There’s a Place for Us” was beautifully delivered. The guys and the girls of both gangs were terrific. Production values, as might be expected, were high— although Maria’s fire escape (or Juliet’s balcony if you will) was extremely noisy on opening night (James Youmans’ set design). “West Side Story” is not without its problems this time out. Then again, it is not without its delights.