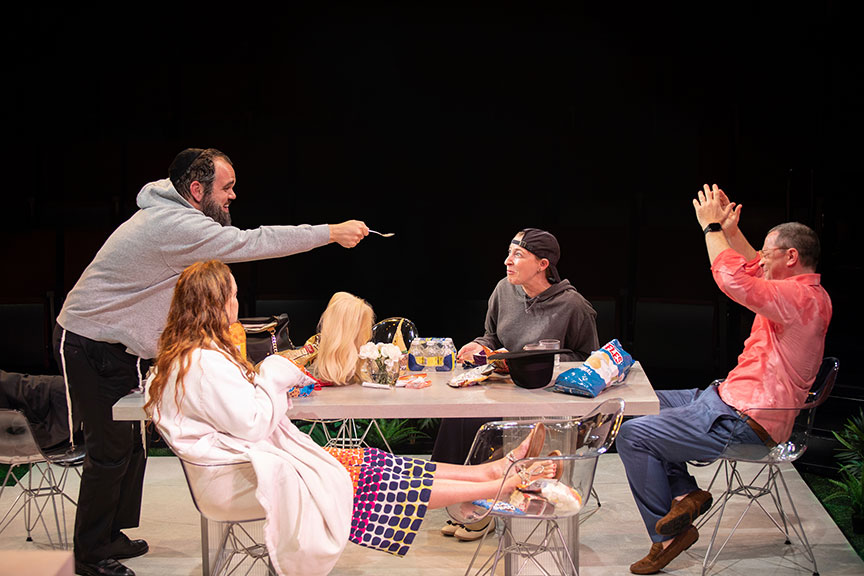 “What We Talk About When We Talk About Anne Frank “is a play that – with molecular precision – dissects the causes and effects of Jewish anxiety. It’s also a comedy.

Debbie and Lauren haven’t seen each other in 20 years and the mood is tense. Debbie and Phil are secular Jews, while Lauren and Mark are Hassidic and live in Jerusalem. In fact, they don’t even go by Lauren and Mark anymore but rather Shoshana and Yerucham.

Phil is expecting fireworks, most likely because he intends to ignite them. He has no love for the Hassidim, and their rules and restrictions. Shoshana and Yerucham affirm his expectations when they almost immediately note that Debbie’s short sleeved blouse would get her stoned in their ultra Orthodox neighborhood. This is no exaggeration.

Phil likes to poke the bear, and he gets a good one in Yerucham, who also came to play. Phil doesn’t like his guest’s self-righteous superiority. Yerucham doesn’t like Phil’s glib jabs. At key moments, Debbie and Phil’s teenaged son Trevor (Nathan Salstone) diverts the tension. Trevor is a militant agnostic and not afraid to go toe-to-toe with Yerucham.

Shoshana and Debbie spar more gently, occasionally finding brief moments of shared joy. The group drinks vodka, and talk about the sheer size of the house, Shoshana and Yerucham’s ten children and other somewhat safe topics, but they always circle back to the Holocaust. Two Holocausts, actually. Hitler’s and the ongoing trend of Jews intermarrying.

The humor is solid but uncomfortable. Phil jokes about creating a Holocaust-themed amusement park. One of the food stands would be called Arbeit Macht Fries. I cringe-laughed often.

The two couples circle each other warily until a small miracle (via luck, fate, kismet or God, depending on your philosophy) unexpectedly unites them. They joyously find common ground for a brief and heartfelt moment.

The cast is superb, both individually and as an ensemble, and the dramatic and comic timing are dead-on. Malina does a great job propelling the conflict and even gets in a few awkward dance steps.

But Phil troubles me. His visceral dislike for Hassidim generally, and Shoshana and Yerucham in particular, drives the play, but I don’t understand it. Other characters talk about their backgrounds, but Phil is silent. This lack of clarity can make Phil’s constant jabs seem annoying. He has a chip on his shoulder, sure, but why?

That aside, the play is one of the most strangely funny pieces of theater you are likely to encounter.