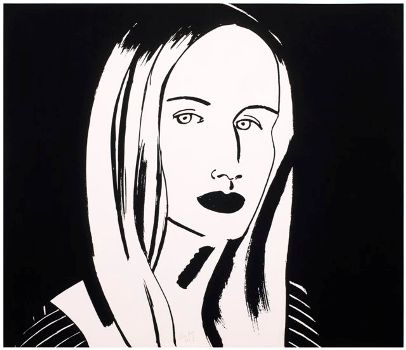 Everyone wants to fit in, even artists. But Alex Katz has never fit into mainstream modernism, or what passes for postmodernism today. Art historians and the general public have tried to pigeonhole him as a pop artist because he uses flat surfaces and simple recognizable images, but his aesthetic concerns have never lined up with theirs. Others have defined him as an artist who simply rebelled against the New York School abstract expressionists because they were the only game in town when he started painting in the 1950s. And here was Katz, who painted what was in front of him, not ab-ex tumult. Could he really be a serious artist without all that ab-ex explosiveness pulsing underneath like a turbulent river? He may have taken heroic scale from them, but turbulence no. He was much more interested in catching the moment on the run, the way a page is finished before another one’s begun.

The page metaphor is apt because the eight portraits here can be seen as pages from an album, though not a 19th-century German romantic Albumblätter, because there’s nothing sentimental about them. His sitters here inhabit their worlds as much as anyone in his work, and their privacy intrigues the way portraits by the great classic masters from Velázquez to Titian, Ingres, and more recently, Matisse and Beckmann, do. But his portraits are never morbid or near morbid, like those of Lucian Freud or Otto Dix.

Katz’s sitters look matter-of-fact and, because of that, enormously suggestive. His dealer Javier López is caught looking directly at the viewer in his 2013 white-on-black etching, “Javier.” Does that spell Spanish sobriety as in de Falla’s severely beautiful 1926 harpsichord concerto for Landowska? Probably not, though it’s tempting to think so. Is “Christine” sad, vulnerable, or just preoccupied with something we can’t see? Is “Elizabeth ” (I-III ), with her mass of thicker, longer hair, resolute — or is it just the way the side or overhead light hits her as Katz records her face? ” And what is “Meghan,” centered in profile, facing left about? She’s classically, almost 19th-century cameo, pretty, though Katz isn’t interested in that past, but in catching the light falling full on her face in the present.

Katz’s muse and wife of 54 years, Ada, makes yet another appearance in a black-and-white left-facing profile view, her image cropped just below the shoulders, complex black shapes against the white that serves as ground. The positive/negative pull of black and white or white grounding black figures in the 10-foot wide woodblock ” Flags,” which substitutes black for the yellow flowers with green stems of his even bigger painting of the same name. The eye reads it quick coming forward, going back.
Katz has always tried to make the time of painting one with the time of seeing, and his aquantint “Late Summer Flowers” certainly fits that bill, with its dramatically cropped view of flowers like peonies, with an off-red one coming quick into the frame.
His aquatint of his daughter-in-law “Vivien” ( Bittencourt ) holds the wall as surely his much larger painting of this same image as she looks imperturbably at or past the viewer into what she can alone see, and the colors here, though muted, pack as much punch as the other monochrome ones in the show.

Alex Meyerovich has shown Katz’s work in San Francisco since 1986. That’s a long time in our relentlessy speeded up present, which Katz has caught with power, precision, and grace, or as his poet friend of many years once put it, “We live in this gradually getting used to… “