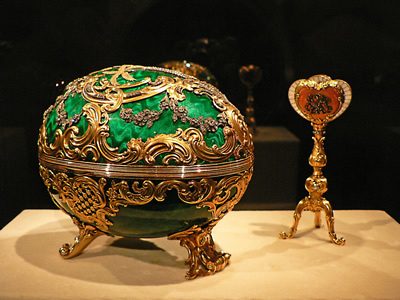 At the 1900 International Exposition in Paris, which was attended by over 50 million people, the work of the three artists, Peter Carl Fabergé, Louis Comfort Tiffany and Rene Lalique, was exhibited together for the first and only time.

In its new exhibition, Artistic Luxury: Fabergé, Tiffany, Lalique, the San Francisco Legion of Honor returns to that historic point in time andexplores the masterly techniques and artistry of the three prominent designers � and the rivalry among them.

The nearly 250 fabulous items, brought together by the Cleveland Museum of Art and the Legion of Honor include works lent by 40 international collectors including Her Majesty Queen Elizabeth II and His Serene Highness Prince Albert of Monaco, as well as institutions and private lenders in London, Moscow, St. Petersburg, Paris, Berlin, Hamburg and the United States.

Fabergé, Tiffany and Lalique competed for the same commissions and customers – royalty, political leaders, actors and business magnates. They drew inspiration from both historicism, reviving popular motifs from the past, as well as new design trends such as Art Nouveau and Modernism. Yet each artist was known for his own characteristic style. For this reason, separate galleries are devoted to each designer.

Fabergé, who catered primarily to the tastes of the Russian and British royal families, was the most conservative in design. He elevated mundane objects (picture frames, clocks, umbrella handles, cigarette cases, inkwells, etc.) into the most luxurious and artistic creations imaginable.

The most inventive, elaborate and extravagant of Fabergé’s creations were the lavish ornamental eggs first commissioned by Tsar Alexander III in 1885 and produced at Easter as gifts for the royal family until 1917.

Each Imperial egg, bejeweled with gemstones, contains a “surprise” hidden inside it. Every year the eggs became more elaborate and inventive and the surprises within, more intricate. Fabergé’s unique use of guilloché enamel on the Imperial Easter eggs contributes greatly to their luminous sheen and rich colors.

Guilloché, engine-turned enamel, is a process in which a machine engraves metal with a perfect pattern of straight or wavy lines. When enamel is poured onto the engraved surface, it creates a playfully optical, iridescent design. The range of enamel colors used by Fabergé could not be duplicated by Cartier and other rival firms, although they tried.

Of the 105 known Fabergé eggs, only sixty-nine have survived to the present day. There are fifty-four known Imperial eggs, only forty-six of which have survived. The Artistic Luxury exhibition contains seven Easter eggs by Fabergé, including Imperial examples such as the Imperial Blue Serpent Egg Clock owned by the family of Princess Grace of Monaco.

Fabergé eggs astounded the jury at the 1900 Paris International Exposition and showered him with honors. The novelty of combining artistic brilliance with functional value – and a touch of whimsy – so captured the imagination of the aristocracy that the renamed "House of Fabergé” was flooded with commissions.

By the time of the 1900 Paris International Exposition, Lalique was at the height of his career as a celebrity art nouveau jeweler with devoted artistic and literary clients such as actress Sarah Bernhardt.

The Artistic Luxury exhibition contains excellent examples of Lalique’s extraordinary jewelry and accessories, which are based on wild flowers, insects, magical creatures and mythology.

After the 1900 Paris International Exposition, as mass producers began flooding the market with “Lalique-style” jewels, Lalique turned to a new medium, glass, with more abstract simplicity. He presented a complete collection of glasswork in 1912.

In today’s economic crisis, as we gaze on these extraordinary objects, it is tempting to devalue them as frivolous extravagances of decadent monarchs and privileged members of the Gilded Age. Yet, over one hundred years later, their beauty endures and can still take one’s breath away.

The year 1900, when Fabergé, Tiffany and Lalique all exhibited at the Paris Exposition, was also a societal turning point. Queen Victoria was late in her years on the throne; William McKinley was president, but would be assassinated one year later. The European powers were solidifying their hold on Africa.

The middle class was emerging while laborers, insurrectionists and anarchists fought for a living wage. The new century brought with it the love of all things modern. Innovations such as the escalator, the moving sidewalk, the wireless telegraph, the first projected sound films and the world’s most powerful telescope were shown at the 1900 Paris Exposition.

The notable events of 1900 below may help to place the works of Fabergé, Tiffany and Lalique in context with the world in which they lived. Yet, these three artisans created exquisite objects that seem to transcend time.

Some Notable Events of 1900