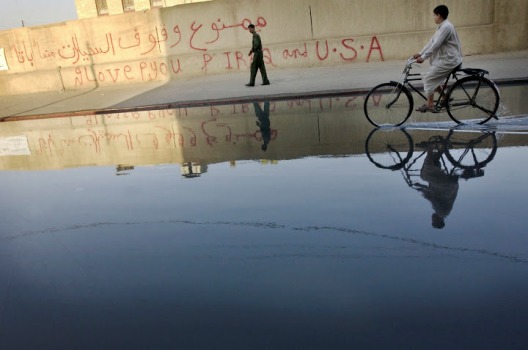 This fascinating and moving exhibit introduces the photographs of Kael Alford and Thorne Anderson — two American-trained photojournalists who spent two years in Iraq. Their photographs, taken before and during the 2003 US-led invasion of Iraq, cover the fall of Saddam Hussein, the emergence of the armed militias that challenged the allied forces, and later, the new central Iraqi government.

Rather than be imbedded in the US military’s journalism program, Alford and Anderson preferred travel on their own so they could photograph daily life in Iraq. Their decision put them in harm’s way. However, it enabled them to learn how the war and its accompanying political and cultural shifts were affecting average Iraqi people from a personal point of view . . . from an “eye level” view.

Alford and Anderson used digital cameras, which were a relatively new technology at the time, and inkjet printers with stunning results. The photographs concentrate on people with whom the photographers made an intimate connection. In fact, both Alford and Thorne returned to Iraq in 2011 to search for the friends and subjects of their earlier photos. Some had died; others had been injured. A few of these later photographs are on display as well.

Some of the photos are dramatic and disturbing. One seemingly unexciting photo is of men putting a menacing gun together, while a boy watches and learns. Perhaps this is ordinary life in Iraq. On the other hand, Anderson’s startling photo, “Hilla, Iraq, May 15, 2003,” presents Iraqis’ searching through dead bodies for relatives secretly murdered by Hussein in 1999.

When you tour this exhibit, you will be struck by the artists’ great commitment to their portfolio and to Iraqi citizens. They were also committed to having their photos seen in the US. Although it may seem odd at first that photojournalists’ works are displayed in museums, there are few permanent outlets for them today. The age of the great photojournalist magazines such as “LIFE” has ended.

Alford has said, “I consider these photographs invitations to the viewer to learn more, to explore the relationships between public policy objectives and their real-world execution, and to consider the legacies of human grief, anger, mistrust, and dismay that surely follow violent conflict. I hope that these images will also open a window on the grace of Iraq and perhaps help to give a few of these memories a place to rest.”