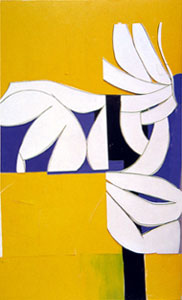 Although her paintings are in the collections of many of the world’s leading art museums, Judith Rothschild’s is not exactly a household name. In part this might be attributed to the pervasive cultural slight long the bane of women artists, but perhaps also it stems from the lack of dramatic innovation in her work. What Rothschild accomplished was subtle and highly controlled. Spontaneity is not an attribute of her works. It is not the stuff that grabs the public imagination.

And yet, walking through the galleries of SFMOMA’s Rothschild retrospective, there is an immediate sensual pleasure in Rothschild’s work from the early works of the 1940’s to her final triumphant series she called "Gothic." There is a comfortable accessibility to these abstractions, gently leading one in to further exploration which is rewarded with the discovery of tensions, dualities, and conflicts that provide intriguing clues to the artist’s thinking and development.

Rothschild’s family history of a demanding father, followed by a domineering and rigid husband, might in part explain the constraint with which her work is marked, but it in no way diminishes what she accomplished over the course of her career. From her early "pure" abstractions, much influenced by Mondrian and Leger, she moved along her own path, seeking an expression less cool, less impersonal. In "Mechanical Personages III," still highly controlled and carefully composed, there is a distinct element of the figurative within the overall abstraction and there is an emphasized sense of brushstroke and pigment, "painterly effects," which, in calling attention to process, also inject the painter into the painting.

When she married Anton Myrer in 1947, the couple settled in California, living in various locations on the central coast. The coastal landscape became an important subject in Rothschild’s work, though continuing in the realm of abstraction which she had been exploring. "Byzantium" and other paintings of the period have recognizable areas of sea and a horizon line, contrasted with strong vertical elements that suggest a wharf-like structure. Other representational elements (birds, boats) can be guessed at as well, but are less important as subject matter per se than as elements in complexly balanced compositions. With these paintings, too, Rothschild seems to find a new palette. In "Prisms and Pavannes" she bursts out as a colorist as she plays with light and pattern. Rothschild was an accomplished pianist; she well knew the slow, stately 3/4 rhythm of the baroque pavane.

By the late 1960’s Rothschild had pared down her landscapes to an almost minimalist form with a more traditional, representational approach. Her focus shifted to the use of strong colors played against one another to evoke the quality of light. In "Sierra de Gredos" she uses rich, dark colors –a deep royal blue for the sky, dark purples and grays for the mountains, a surprising wine color in the foreground. Amongst these landscapes, the bulky volume of the mountains is unique; more often they tend to a flattened perspective. In "Algarve II" there is a tension between the flatness of the flowing horizontal bands of color and the way the eye sees a great distance from the pale foreground to the more strongly colored hills on the horizon against the yellow-green sky. By 1970, "Alcestis VI," clearly a continuation of these works, is completely abstracted, a series of horizontal bands of color of different widths.

"Interior," a large and elegant canvas, imposes white lines over broad swaths of rich color. It seems the culmination of what had preceded and the start of a return to figurative representation. During the 1970s, Rothschild began working with foamboard cutouts, creating reliefs of abstracted patterns suggestive of body parts, flowers, or less recognizable forms. The influence of Matisse is surely felt. These cutouts are most often white and placed against colored grounds. Seeking even greater control than the foamboard allowed, she moved into doing the cutouts from aluminum, gaining a more precise line. In "Bathers IV," using foamboard she achieves a strong composition that manages to retain a sense, if not of spontaneity, at least of freedom, of a sort of appealing looseness.

During the last fifteen years of her life, Rothschild narrowed her focus to the Gothic series, using the same calligraphic sort of pattern repeatedly in tightly controlled aluminum cutoutreliefs. She used different colors in different reliefs, both for the cutout and for the background field, and there are minor other variations, but the Gothic pattern is repeated in a cookie cutter fashion. Biographer Jack Flam calls these works a breakthrough: "It…allowed her to synthesize the kinds of discontinuous pictorial incidents that she so admired in Matisse’s late cutouts with the unified but disembodied sort of space that had long impressed her in Mondrian’s late works."