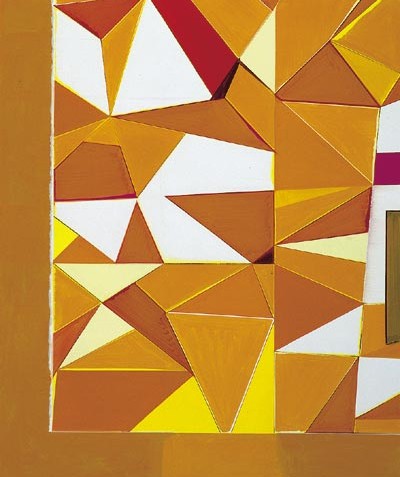 The UC Berkeley Art Museum has mounted the first solo museum exhibition of work by Thomas Scheibitz, a young (33) artist from Berlin, under the museum’s Matrix Program. (Matrix, with generous financial assistance from philanthropist Phyllis Wattis, is designed for flexibility in presenting the work of emerging artists.) The program also supported a summer residency for Scheibitz at the Headlands Center for the Arts and the dozen works that make up the exhibit were all executed during that residency.

Scheibitz is an abstractionist who, more often than not, includes recognizable imagery within his canvases. The eponymous I-geometrica B seems an exception, composed as it is of a series of geometric shapes. It fits more clearly with the other works in the show when it is understood that Scheibitz is an avid collector of images from the media–movies, television, magazines–and the starting place for I-geometrica B was one of those magazine puzzles that asks the reader to find a particular item within a heavily patterned design.

But while that might be the starting place, Scheibitz has more complex challenges on his mind. His puzzle is the eternal puzzle of the painter, questioning here, as in other works, the nature of representation on the two dimensional plane of the canvas. His triangular shapes play with depth perception but the overall effect is of flatness. The unsettling effect of the border, which runs only on two sides, creates the impression that the canvas is a quartile of a larger whole and makes the eye want to expand the painting beyond its edges. This effect is further emphasized by the vertical division into two unequal columns; the right hand column is narrower and seems incomplete, an effect enhanced by the area of white and the touch of green on the right-hand edge. (Of course, you can find the five pointed star, the quest for which was the puzzle from which the painting emerged, but stopping there would quite miss the point.)

In contrast, Judith and Maria presents two defined figures within a landscape. While the title suggests people’s names, the figures seem like a cross between stick-figures and flowers. Strong off-shades of pink and green dominate, a gray sky lowering in the background–Scheibitz’s palette seems a direct descendant of the German Expressionists. The jagged vertical borders suggest that a pink layer lies behind the painting. The multiple arms/leaves of the two figures intersect, defining areas of varying shades of color. Brush strokes (the oil paint is unusually thinned) are evident and Scheibitz leaves some areas with a sense of being not quite finished. As with I-geometrica B, the artist and the activity of making the painting are in evidence; it’s like the painter is right there, asserting his presence between the viewer and the work.

A third work, Bannister Diamond, is a large landscape with a building fully recognizable, a horizon line and perhaps the sun discernable, but all becomes less definite as abstraction takes over from representation. It also has suggestions of depth, particularly in the building, but the larger space is ambiguous, flattening out in its areas of color and changing perceptions with its conscious presence of the painterly process.

In addition to nine paintings, the exhibit includes three sculptural works. One is a construction made of layered papers defining an irregularly shaped building. There are cut-outs for windows, some with the look of portholes and all allowing the next layer of paper to be seen behind. Pen and pencil, crayon, and gouache are used, more heavily on one side; the back is left mostly white, with corners defined by black lines. Another piece is of sheet aluminum, shaped into a conical form, hung high on the wall, a large aluminum nail inside suggesting that that is what holds the piece in place–this one calls to mind the wit of Tom Friedman‘s work.

In this apparently disparate group of works, Scheibitz demonstrates superb talent as a colorist and versatility in the use of a variety of materials. It is, perhaps, the mark of a younger artist that there is an intense quest–an exploration of the nature of painting, and the differing nature of sculpture, not only as means of expression, but also the process itself, the limitations that a medium presents and creative ways of transcending those limitations. Scheibitz bring to his quest acute observation, inquisitiveness, energy, and intensity. It will be interesting to watch his development and the directions that he takes in future works.