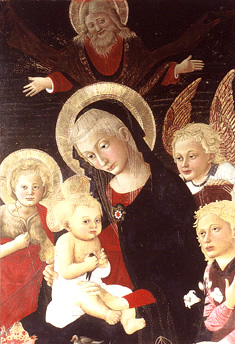 John the Baptist, Angels and The Holy Father

When the Louvre and the Musee d&#146;Orsay are on strike or closed for a national holiday, is there any place to visit in Paris besides the Luxembourg Gardens and the Eiffel Tower? Yes, indeed there is, and what&#146;s more it&#146;s the kind of place that is both awesomely beautiful and delightfully entertaining. Now that&#146;s a tall order for an art museum, but then again, since the Jacquemart-Andre Museum was refurbished and brought back to life five years ago, it&#146;s been the talk of the international art world. And even those die-hard Parisians who have never stepped foot into the Louvre love the Jacquemart, if only because it boasts the only restaurant where you can eat beneath an original Tiepolo ceiling.

A house-museum, whose five thousand works of art and antiquities range from the Lower and Upper Egyptian Kingdoms to the Italian Quattrocentro to the Dutch School of Old Master painting and the Rococo of Boucher, Fragonard and Greuze, the Jacquemart-Andre is in a class by itself. The sumptuous edifice, built in 1869 by the architect Henri Parent (second runner-up after Charles Garnier to the Paris Opera) was commissioned by Edouard Andre, the sole heir to a colossal banking fortune. It was so colossal that in 1871, he and the Baron Rothschild ponied up&#151;in a single week–5 billion francs in gold as a war indemnity to Bismarck, a payoff that prevented the Prussian army&#146;s occupation of Paris. Andre had at his disposal twice the annual art budget of the Louvre.

Although he was a Bonapartist and a one-time member of the Imperial Guards, after the defeat of France in the Franco-Prussian War, Andre retired from public life to amass one of the greatest art collections in France, prepare the museum that would one day become the Museum of Decorative Arts (second only to the Victoria & Albert in London), and publish the Gazette des Beaux-Arts, still the world&#146;s most prestigious art publication.

There is no doubt that he was a dashing and handsome man-about-town who, like many of his class, led the life of a cosmopolitan roue, much to his family&#146;s distress. By 1881, they made it clear that it was high time that he settle down, particularly since he was plagued by the gout. They were soon to become even more distressed, when instead of proposing to a socially and financially endowed heiress, he chose instead, a self-made woman, a portrait painter, named Nelie Jacquemart, whose father had been a steward on the country estate of one of the wealthiest widows in France, Rose de Vatry. The childless Rose had taken Nelie under her wing. Recognizing her protegee&#146;s artistic talent, Rose sent her to study first with Leon Cogniet in Paris and later in Rome at the Villa Medicis. (The Ecole des Beaux-Arts was closed to women until after World War One).

Nelie began earning her way at 19, drawing for L&#146;Illustration, one the leading weeklies of the time, and later, dedicating her talents mainly to making society portraits of the Orleanist aristocracy which made up the social sphere of Madame de Vatry. Oddly enough, she had painted her future husband&#146;s portrait in 1872, a work that now hangs in the boudoir where the couple took breakfast and tea.

By the time Edouard Andre proposed, Nelie was close to forty, had a flourishing artistic career and a handsome establishment of her own. Yet, as independent as she was, she must have been tempted by the prospect of a blank check that would permit her to make The Grand Tour at least six months of the year, and bring back a staggering array of objects, the finest that money could buy at the time. In fact, crates of antiques from abroad continued to arrive several months after her death.

A visit to the museum demonstrates that Edouard was most astute in his choice of bride, for without her artistic knowledge, he would never have amassed the collection of Italian Renaissance paintings and sculptures by Botticelli, Uccello, Mantegna and Bellini. Moreover, it was at her behest that he built up a stunning collection of Old Masters, including paintings by Rembrandt and Van Dyck, and an unforgettable portrait, Man in Gray, by Frans Hals, painted when he was eighty-years-old.

Although the Andre mansion was complete when Nelie moved in, the excellent audioguide reveals how the house changed in layout and design during their marriage. The upstairs gallery&#151;intended to be Nelie&#146;s studio&#151;was arranged to hold their Italian treasures, and Nelie&#146;s original sleeping quarters were changed, so that she could be closer to her increasingly infirm husband. Of course, it was she was responsible for handling all tradesmen, painters, cabinetmakers and art dealers, no small feat at a time when women were still regarded as chattel.

Andre must have been grateful because he made her his sole heir, which allowed her to travel to the Far East and amass an exceptional collection of Indian and Oriental antiquities and furnishings. She in turn, abided by the wishes of his will, continuing to enrich the collection of the Jacquemart-Andre Museum so that it is now one of the great showplaces of the world. Thanks to private management, visitors can now eat Botticelli and Uccello salads under a Tiepolo ceiling, in which the artist and his pet monkey look down fondly at their new slew of admirers. Happily satiated with art, French food and wine, it&#146;s not hard to imagine that the host and hostess, Edouard and Nelie, are still in residence.