History, they say, is written by the winners, but most of what we know about the Vikings was recorded by their victims, who were usually Christian monks, and the monks were very sore losers. To them we owe the traditional picture of raping and pillaging marauders, as immortalized on screen by Einar, the one-eyed warrior portrayed by Kirk Douglas in Richard Fleischer’s 1958 epic, “The Vikings.” More recently, though, historians have insisted on a softer image of the Norsemen, stressing their activities as traders, explorers, craftsmen and shipbuilders, rather than as mere macho role models. One of the merits of the British Museum’s absorbing new exhibition, “Vikings: Life and Legend,” is that it maintains a judicious balance between these opposing viewpoints. 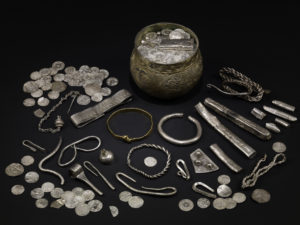 What’s immediately striking about the Vikings is their remarkable geographic reach, well presented in some impressive visuals at the beginning of the show. Sailing north to the Arctic Circle, south to the Mediterranean, east to the Caspian Sea and west to the Atlantic coast of Canada, the Vikings were everywhere. The Vale of York hoard (shown above; © The Trustees of the British Museum) demonstrates this very well: it includes jewelery and coins from as far afield as North Africa, Ireland, Continental Europe and present-day Uzbekistan, all buried in a Frankish communion cup.

During the period covered by this show, roughly from 800 to 1050 AD, the people of Scandinavia drew on these varied influences to form a distinctive visual culture. Much of it is of surprisingly high quality: one cabinet displays a huge, finely-wrought gold neck ring from Tisso, Denmark, not the sort of thing you normally associate with barbarian culture. Weighing in at 2 kilos, it must have been torture to wear, but, as curator Gareth Williams points out, this particular piece of bling was a bit like top designer shoes today: you buy them not because they’re comfortable, but to show people that you can afford to be uncomfortable.

The highlight of the exhibition, though, is undoubtedly Roskilde 6, a 37-meter-long warship — the largest Viking vessel ever found — from the Roskilde Ship Museum in Denmark. Only about 20 percent of the original remains, but the surviving timbers have been reassembled in a stainless-steel frame (itself an impressive piece of modern Scandanavian design) that reconstructs the original dimensions of the ship. Looking up at this truly spectacular example of shipbuilding prowess, you begin to understand how the Vikings ranged as far and wide as they did.

The second half of the show returns to the traditional picture of war and fighting, and focuses on a remarkable find from Weymouth in Dorset, where the remains of about 50 Vikings were excavated in 2009. The skull of one warrior has the front teeth filed down, the grooves coloured to make them more fearsome-looking, and you’re reminded of the shield-chewing “beserkers” from the Isle of Lewis chess set. But even here all is not what it seems. Buried in a disused Roman quarry, the heads had been separated from the bodies and stacked to one side; it was probably a longship crew executed by the Anglo-Saxons. The Vikings didn’t always have it their own way.

By 1050 the Scandanavian world was beginning to coalesce into the newly formed Christian kingdoms of Denmark, Norway and Sweden, and the old buccaneering spirit was on the wane. The show ends with a section devoted to Viking beliefs, which, it turns out, were remarkably diverse: alongside Odin, Thor and the halls of Valhalla you find sacred groves, sorceresses and shape-shifting animal spirits, the adoption of which seems to have been pretty much down to the individual worshipper. This pragmatic approach explains why Christianity was absorbed without much fuss: Christ was just another “god” to be added to the existing pantheon of deities.

This show is the first to be mounted in the Sainsbury Exhibitions Gallery, the British Museum’s new temporary exhibition space, and unless you arrive expecting a Viking “experience” with horned helmets, blood feuds and blazing ship funerary ritual, you won’t be disappointed. This is a big, handsomely mounted exhibition, underpinned by outstanding scholarship, incorporating up-to-date research and the latest archaeological finds. When it comes to putting on blockbusters, nobody does it quite like the BM.