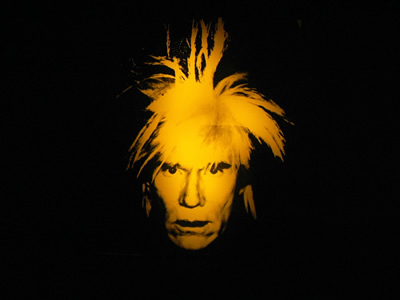 After all these years of looking at Warhol, I’m still trying to figure out where the art ends and the artifacts begin. Certainly, without his cult of personality, we wouldn’t be seeing the fresh and exciting Warhol Live exhibition at San Francisco’s de Young Museum (February 14-May 17, 2009) and Pittsburgh’s Andy Warhol Museum (June 10-September 15, 2009).

Warhol Live presents the first comprehensive exploration of Andy Warhol’s work seen through the lens of music and the performing arts; it examines the fundamental ways in which music, dance and other performing arts influenced and affected his life and his art.

The exhibition shows chronologically about 640 works and objects, paintings, silkscreens, photographs, works on paper, installations, films, videos and album covers, as well as objects and documents from the artist’s personal archives.

A unique aspect to Warhol Live its musical accompaniment, which guides and compliments us through the various stages of Warhol’s career, providing a visual and aural score to Warhol’s extraordinary work and life.

In some sections of the exhibition, the music adds an energizing dimension, notably in the room recreating the Exploding Plastic Inevitable experience. The music by Nico and the Velvet Underground makes the room come alive. However, in the more open areas of the museum, one can hear more music than one might like, as various slices of music devolve into a cacophony of sound.

The interesting collection of Warhol’s personal record albums, with his music and arts memorabilia from 1949-1987, reveals the wide scope of his musical taste, which ranged from Shirley Temple and Fred Astaire, through the Shangri-las, to Maria Callas, Leontyne Price and Van Cliburn.

In fact, while Warhol was promoting the Velvet Underground in the 1960s, he was also a season subscriber to the Metropolitan Opera and an illustrator for the Met’s Opera News program.

These are whimsical ink drawings in a loose blotted-ink style, the lettering of which was often drawn by Warhol’s mother.

As a successful commercial artist during the 1950s, Warhol worked for most major fashion magazines; he designed Tiffany Christmas cards, book jackets and retail ad campaigns (including the famous shoe ads for I. Miller). Many of the 1950s illustrations were familiar to me, but I had no idea that they were drawn by Warhol.

Of the fifty-one record album covers that Warhol designed during his career, among Warhol’s masterpieces may be the three he created for the Rolling Stones. Unfortunately, the first commission did not materialize.

His Sticky Fingers (1971), which depicted a close-up photograph of a male groin, clad in jeans and viewable from the front and back, was nominated for a Grammy award. With a strong sexual connotation appropriate to the Stones, the zipper on the front of the album cover could be lowered to give a glimpse of the model’s underwear.

His third design, for Love You Live (1977), shows the band members biting each other in a cannibalistic parody of the album title.

No Warhol exhibition would be complete without some of his emblematic pop art. Displayed are Brillo Boxes (1969 version of 1964 original), Colored Campbell’s Soup Can (1965), and his painted wood Coca-Cola bottles, You’re In (1967).

To round out Warhol’s career, one can view the artist’s films, including Sleep and Empire, as well as the Screen Tests of the musicians of the Velvet Underground and Andy Warhol’s TV and video clips produced for groups like The Cars and Curiosity Killed the Cat. Warhol also produced music videos and met with musicians, notably for Interview, the magazine he founded in 1969.

Not only does Warhol Live succeed admirably in exploring the fundamental role of music and the performing arts in the artist’s work and life, but it also provides a fascinating insight into the artist behind the myth. And it’s fun.

Warhol Live is produced by the Montreal Museum of Fine Arts in partnership with The Andy Warhol Museum, a Carnegie Museum of Pittsburgh.