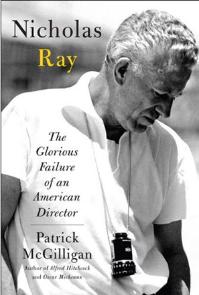 Ray of Light and Dark

By the time Nicholas Ray directed “Rebel Without a Cause,” he was one of the most accomplished and creatively daring directors around. He thrived in straitjacketed 50s Hollywood, flouting studio morality clauses, escaping red-baiting blacklists and emerging internationally as the first American auteur. His rocky personal life of failed marriages, boozing and gambling didn’t slow him up either. Ray’s tumultuous career is brought into sharp focus in Patrick McGilligan’s new biography, “Nicholas Ray: The Glorious Failure of an American Director.”

Ray grew up in the La Crosse, Wis., in the 1920s and was a rebel from the start. He excelled in writing and theater in high school, even though he was, like his father, already a heavy drinker. Ray directed community theater there and at the University of Chicago, he came under the guidance of Thornton Wilder. Ray left school for New York but soon snagged a fellowship at Taliesin, Frank Lloyd Wright’s experimental commune, which also housed a new theater. The budding director and iconic architect soon split over artistic differences, or McGilligan suggests, something more personal.

In New York, Ray fell in love with writer Jean Hayes and the young couple moved to Washington, D.C., as Ray nurtured ties with the most underappreciated American folk artists. He also formed alliances with powerbroker director John Houseman, who used Ray’s expertise on folk music for international radio broadcasts during WWII. Soon, Ray was soon in Hollywood working as Kazan’s assistant on “A Tree Grows in Brooklyn.” Meanwhile, he left Hayes and his young son, determined to establish himself in Hollywood at the start of WWII. He dodged the draft, the book reveals, claiming he had debilitating arthritis, was homosexual or a leftist radical.

The author’s is expert in his clarifying the import of the New York radical theater scene and mostly lost history of the WPA arts initiatives, not to mention his first-rate analysis of the effect of the blacklists. Ray’s first film, “They Live by Night,” starring Farley Granger, was considered successful, but was shelved because RKO, the studio, was on the skids. He became a film fixer for Howard Hughes when he bought the studio. Starting in the 40s, Ray survived the House Un-American Activities rabid red-baiting, because of Hughes’ protection, but Ray eventually was forced to name names in private testimony to keep his career on track.

Ray was a director with clout and a reputation as a drinker, gambler, and womanizer. Ray and Hayes remained friends after divorcing, but he was an undependable absent father. Ray had a very stormy marriage with Gloria Grahame, (who co-starred opposite Humphrey Bogart in Ray’s hit, “In a Lonely Place”), which ended when the director walked in on Grahame and his 16-year old son (with Hayes) having sex.

He was linked romantically with Shelley Winters, Judy Holliday and Marilyn Monroe, but his affair with 16-year old Natalie Wood (see photo), while he was

directing her in “Rebel,” caused the most industry buzz. Ray’s gay subtext in “Rebel Without a Cause”flew under the radar of censors, but didn’t go unnoticed by gay men. Ray encouraged the romantic chemistry between Sal Mineo and James Dean. Ray never denied he himself slept with men, even if he saw that as different from being homosexual. During the making of “Bigger Than Life,” a daring vehicle for James Mason, Ray started an affair with 33-year-old British journalist Gavin Lambert, who was one of the first international critics to champion Ray as a major auteur.

Even though some cite his decline in the aftermath of Dean’s death, Ray‘s penchant for heavy drinking, drug use and fast-lane living were starting to take a professional toll. Despite a series of failed films, Ray started to make large-scale, more commercially savvy films like “Flying Leathernecks” (starring John Wayne)and became the highest paid director around when an international producer hired him for MGM’s 1961 biblical epic, “King of Kings,”starring Jeffrey Hunter.

Ray couldn’t complete his last film, “55 Days in Peking,”starring Charlton Heston, and the negative buzz essentially ended his career. Ray didn’t make a film for 10 years, in poor health and bailing on one failed project after another. After emerging briefly in the 1970s as a guest professor at various colleges, his last creative output was an experimental film about the Chicago Seven he made with students and as an art pornographer. He was on his fourth marriage, sober and returning to legitimacy working with German director Wim Wenders, when he was diagnosed with lung cancer.

This is a stellar Hollywood bio that doesn’t just rehash already sensational stories about Ray. With one or two exceptions, the author avoids getting bogged down in factoids or side-tracked with unsubstantiated gossip. Like his subject, McGilligan goes for the most insightful, thought-provoking angles.