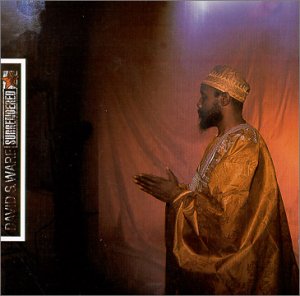 David S. Ware is one of the most powerful saxophonists currently working. His technique goes far beyond the sometimes-contrived overblowing of Charles Gayle or the squiggly abstractions of Sabir Mateen or Daniel Carter. He is possessed of a deep and resonant tone virtually without equal; only David Murray can match Ware’s command of the tenor saxophone’s lower range, and Murray is far more hit-and-miss in his choices of material and approach. (David Ware, to pick only the most egregious example, would never have allowed himself to be caught onstage with the Grateful Dead.)

His first album for Columbia Records, Go See The World, was a no-holds-barred introduction to his music, and it arrived like a note strapped to a flaming arrow. The record was free in the extreme; though a few tracks pulsed with rudimentary melody, particularly the opening "Mikuro’s Blues" and a shattering, epic version of "The Way We Were," the majority of the album consisted of workouts in what was, by then, the time-honored Ware style: minimal, choppy melodic phrases, repeated mantralike and serving as the launching pad for epic, valve-bursting, reed-cracking solos. Behind him, Shipp, Parker and Ibarra constructed a wall of sound like nothing else in contemporary jazz. For the mainstream jazz press, it was an epochal, gut-wrenching record; for those who’d followed Ware’s ten-year sonic development (as a leader; he first emerged apprenticed to Cecil Taylor), it was just one more album.

This has been Ware’s albatross, to varying degrees depending on the individual listener. For all the technical marvelousness and undeniable power of his music, particularly in a live context, he has made something close to the same album too many times over. Early, indie-label works like Cryptology and Great Bliss and, particularly, his Japanese-only efforts like Godspellized and Earthquation, sit far too close, in many respects, to more recent efforts like Go See The World and its immediate predecessor, Wisdom Of Uncertainty.

His latest effort, Surrendered, changes all that, decisively, and his music is immeasurably better for it.

The album’s title could be taken by militant avant-gardists as a sign that Ware has capitulated to label pressures in releasing this record. For the immediate impression is that it is a decidedly more "mainstream" or "casual-listener-friendly" record than anything which came before it. But it is perhaps preferable to think of the title as Ware surrendering to his own past and to his influences.

The opener, "Peace Celestial," is one of the most beautiful ballads Ware has ever attempted; it is immediately indicative of the sort of worrying away to the utter root of a musical concept that Ware specializes in live. "Sweet Georgia Bright," "Theme Of Ages" and "Surrendered," the three pieces which follow, are more upbeat, though simultaneously even more introspective. It must be mentioned that Susie Ibarra has been replaced in the drum chair by Guillermo E. Brown, who has changed the band utterly (as Ibarra did when she replaced Whit Dickey). Brown comes from a funk and rock background, and his powerful stroke offers an impetuousness and a power that Ibarra (who preferred the subtle deployment of miniature percussion instruments, and a generally more abstract style) only rarely produced. When Ware and Brown go after one another, with Shipp and Parker serving only to construct a sort of boxing-ring of block-chords, the album becomes something quite astonishing.

Ware has often been compared (by lazy critics) to late-period Coltrane or to Pharaoh Sanders. Neither comparison is truly accurate, and one hopes that upon hearing "Sweet Georgia Bright," "Glorified Calypso," and "African Drums," that these ideas finally will be put to rest. "Georgia Bright" is a Charles Lloyd composition. Lloyd was the first, in the mid-1960s, to bring avant-garde jazz to a hippie rock audience, and Ware has spoken often in interviews of wishing to bridge that gap once more, himself. "Glorified Calypso" is a tribute to Ware’s childhood mentor, Sonny Rollins. Rollins tutored Ware as a teenager, and was the first musician to bring calypso rhythms and melodies to jazz. This piece is, if possible, even more explicit a tribute than Ware’s remake of Rollins’s "East Broadway Run Down" on the Third Ear Recitation CD ("Run Down" was, after all, Rollins’s attempt to come to grips with the post-Coltrane "New Thing," and hardly representative of his greatest works or concepts). And on the disc’s last cut, the nearly 17-minute "African Drums," Ware essays a virtually textbook Coltrane style-cop. Not the post-1965 Coltrane of Ascension and Interstellar Space, to whom he has been compared in the past, but the modal Coltrane of My Favorite Things and "Afro-Blue." Guillermo Brown’s churning rhythms drive Ware onward and upward, in spiraling loops of sound, until the piece at last comes to rest, and the listener exhales, knowing that this has been a revelatory journey indeed. Surrendered is not a record of capitulation by any lights; rather, it is a record which must be surrendered to, and the rewards it offers are great indeed.