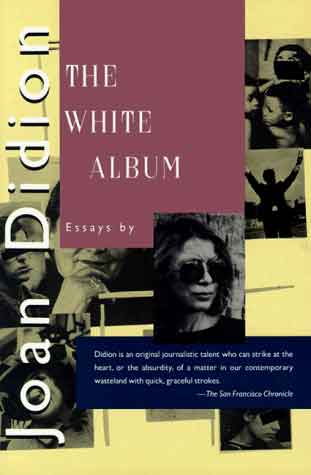 Joan Didion&#146;s The White Album was first published in 1979 and can be considered a follow-up to her Slouching Towards Bethlehem published 11 years earlier. It consists of 20 essays arranged in five sections, including one about California phenomena, one about women, a third entitled "Sojourns" ranging from a shopping mall to Hollywood to the author&#146;s all too frequent migraine headaches. As an authorial persona, Didion both observes and participates in her times, insider and outsider at the same time.

The language is not formal–a mixture of colloquial turns of phrase and unusual vocabulary.

Didion’s sense of structure is stunning. The essay "Many Mansions" is only seven pages long. It journeys from the unoccupied governors&#146; residence in Sacramento built by Ronald and Nancy Reagan, focusing on its mediocre architectural style ("an enlarged version of a very common kind of California tract house, a monument not to colossal ego but to a weird absence of ego") back to the former governors&#146; residence built in 1877, a large white Victorian gothic which Didion occasionally visited, since she knew the governor&#146;s daughter at the time. She describes riveting details of the decor of both, taking a strong stance against the bland banality of the decorating style of the Reagans&#146; residence. The essay ends with Gov. Jerry Brown&#146;s cheap apartment, where he sleeps on a mattress on the floor. The piece is only on one level about governors&#146; residences; woven throughout is a discussion of "touchy and evanescent and finally inadmissible questions of taste, and ultimately of class."

With a simple repetition of "it was," she links ideas in one long sentence leaving the reader breathless: "It was Ray Manzarek and Robby Krieger and John Densmore who made The Doors sound the way they sounded, and maybe it was Manzarek and Krieger and Densmore who made seventeen out of twenty interviewees on American Bandstand prefer The Doors over all other bands, but it was Morrison who got up there in his black vinyl pants with no underwear and projected the idea, and it was Morrison they were waiting for now." She uses the same phrase "in practice" to begin four consecutive sentences, building momentum.

Didion also constructs sentences that work the other way around, starting in one place but ending up somewhere completely different. On a book tour she gives a series of radio interviews, in the course of which she is often asked where America is heading. "I never learned the answer, nor did the answer matter, for one of the eerie and liberating aspects of broadcast discourse is that nothing one says will alter in the slightest either the form or the length of the conversation." She rarely uses simple lists for emphasis, but rather strings varied constructions together. Sentence take unexpected grammatical turns: "Maybe that is the one true way to see Bogot�, to have it float in the mind until the need for it is visceral, for the whole history of the place has been to seem a mirage, a delusion on the high savanna, its gold and its emeralds unattainable, inaccessible, its isolation so splendid and unthinkable that the very existence of a city astonishes."

She&#146;s describing her personal malaise and the malaise of the time, so specific emotions are sometimes hard to pin down. But that doesn&#146;t mean that the examples given are equally vague. When she arrives in Bogot� in 1973, she names the movies playing at the cinemas from the early and mid-1960&#146;s, and a book from 1964 on the paperback stands. It felt like travelling backwards in time and Didion confirms her feeling by naming specific films and books; her opinions are all the more believable given the details she shares.

Didion deplores the decline in American language usage and level of education without carrying on, seemingly simply observing. She quotes a film producer: "How can anyone protest a book that has withstood the critical test of time since last October?" She makes moral statements by juxtaposing unusual facts in a surprising way, not with diatribes: "It is no coincidence that the Pentecostal churches have their strongest hold in places where western civilization has its most superficial hold. There are more than twice as many Pentecostal as Episcopal churches in Los Angeles."