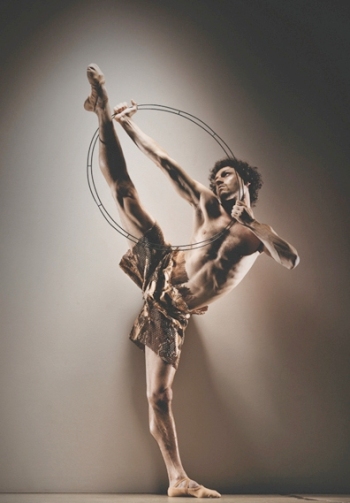 Among Alonzo King’s Sephardic musical selection for his new ballet, “Resin,” are songs from Turkey, Morocco, Spain, and Yemen. The music is lush, full of its own ancient imagery, evocative of trade routes and the cross-fertilization of cultures and time. It has the emptiness of a vast desert, the passion of a market bazaar, and the mournful fervor of a people in exile. It includes psalms, children’s songs, mystical poems, and soulful instrumentation, almost all the things that we least associate with ballet—except, of course, one created by King.

“Resin,” with its 14 musical/dance offerings, is full of profound simplicity: in staging (decor and costumes by Robert Rosenwasser); lighting (Axel Morgenthaler); and choreography that fills the stage like the incense made from resin, the same resin that dancers crush into their ballet shoes to keep from slipping. At times during the performance this resin rains upon dancers as if standing under a showerhead, or, it is thrown like seeds to the wind, or used a waterfall, like backdrop to movement downstage of it as the final curtain sets. Yet, unlike King’s cumbersome 2011 spring premiere of “Triangle of the Squinches,” neither dancers nor choreography are limited by this element, and in fact, are freed by it.

Beautifully assembled, with space between notes and steps, “Resin” also has another of King’s trademarks, which is the honesty of relationship between dancers and the dance, and dancers with each other. When a pas de deux takes place in silence between Victor Mateos Arellano and Ricardo Zayas, it is done so without statement or provocation, it is natural and real, as it is in any other combinations of two, four, or the entire company. King demands honesty from his performers, and he gets it.

“Resin” perfectly showcases the company’s maturing talent—a collective aptitude that is perfectly balanced among its members, even with many first-season dancers. And, as these gifted dancers continues to ripen, King’s choreography meets each of them like their perfect lover and perfectly matched adversary. How then, does newcomer (yet seasoned dancer) Arellano manage to shine even brighter among this dazzling constellation? Arellano has a precision and timing so accurate that it’s as if he is a half-beat ahead of each note. With acute alacrity, he approaches each move with tangible lightness and joy. And, in turn, light seems to sparkle off him as if blessed by the gods. Arellano is a rare talent without coming off as a demigod within King’s egalitarian choreography. He is a destination dancer, a must-see, and a career worth following, much in the way that “Resin” is worth seeing more than once.

“Who Dressed You Like a Foreigner?” is on the same program for a number of similarities to “Resin.” It’s as if Resin were a latter-day version of “WDYLAF?” with likenesses in staging and costuming (also designed by Rosenwasser/Morgenthaler, with Sandra Woodall adding to costumes), and a score by the celebrated Indian composer Zakir Hussain comparable in tone. While the choreography is less lyrical, alluding more to abstract classical ballet, it also has spaciousness in the staging, and ends with blossoms or snow also falling from above over Meredith Webster and David Harvey. “WDYLAF?” is less satisfying, but only in comparison to it being more fully realized in “Resin.” And, it’s curious why this piece wasn’t presented first, so that one leaves the theater with the full impact of “Resin.”

Dancing in both pieces is veteran dancer Webster, who embodies a maturing urban hipster— been there done that—sensibility that works both in her favor and in the company’s. Her attitude and look is refreshing and not at all off-putting. In the final scene from “WDYLAF?”—a scene that is an anomaly compared to the early four segments both in costuming and in its literal emotional quality of the choreography—she cradles. rocks, and pushes away Harvey as if she were the ocean and he a shipwrecked sailor.