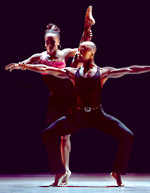 There was a sense of exhilaration after a performance of three very different dances by the Alvin Ailey American Dance Theater. The program provided a primer in theatrical dancing, redefining the three r&#146;s as the three s&#146;s: style, sizzle, and sex. The company looks great and they communicate joy and energy unstintingly.

Artistic director Judith Jamison honors the legacy of her mentor, company founder Alvin Ailey, through the quality of the dancers and their dancing. That great classic, Revelations, Ailey&#146;s best work that served as the closing piece, showed an attention to detail that said everything about the company&#146;s artistic leadership. Jamison and her associate artistic director Masazumi Chaya respect its folk directness and also give it theatrical punch. The piece has never looked better. Venus Hall and Benoit-Swan Puffer danced the lead couple in &#147;Didn&#146;t My Lord Deliver Daniel&#148; giving the fluttering hand gestures an impressive clarity. &#147;Wade in the Water&#148; was performed with undulating freedom by Dwana Adiaha Smallwood, Matthew Rushing, and Renee Robinson. Jeffrey Gerodias gave an intense account of the solo &#147;I Wanna Be Ready.&#148; Clifton Brown&#146;s leaps across the stage in &#147;Sinner Man&#148; elicited a burst of applause. And the best came last, starting with the women and their talking fans in &#147;You May Run On&#148; which leads seamlessly into the irresistible finale &#147;Rocka My Soul.&#148; The frenzied applause led to a repeat of the final sequence, as it usually does, only partially satisfying the audience&#146;s desire for more. But the evening was over and the dancers deserved a rest.

The local premiere of Jamison&#146;s Here…Now. demonstrated that she knows how to display the gifts of her dancers and also choreograph in her own style. An homage to Florence Griffith Joyner, the piece celebrates athleticism to a jazzy score by Wynton Marsalis. Jamison uses running poses discretely throughout the piece to establish the profession she is depicting. There is a feeling of community among the dancers as they work and play. Linda-Denise Fisher-Harrell has the Joyner role, and she gives it an appealing simplicity and dignity. Besides Emilio Sosa&#146;s colorful costumes, the work was further enhanced by the scenic and lighting design by Al Crawford. His use of an elliptical hanging sculpture was mirrored by a curved ramp towards the back of the stage that served the dance and added a metaphorical touch when its edge was lighted towards the end.

The program began with a sharp performance of Donald Byrd&#146;s Dance at the Gym. This is an intense dance of seduction for four couples set to a dramatic score by Mio Morales. Dwana Adiaha Smallwood opened the piece, performing in front of the four men as though she were a gym instructor and a temptress rolled into one. Flashing arms and high kicks establish her domination. One by one the other three women appeared, each revealing a slightly different personality. The sexy costumes (by Davis Church redesigned by Barbara Forbes) and dramatic lighting (by David H. Rosenburg) added to the strong effect made by this exciting work.