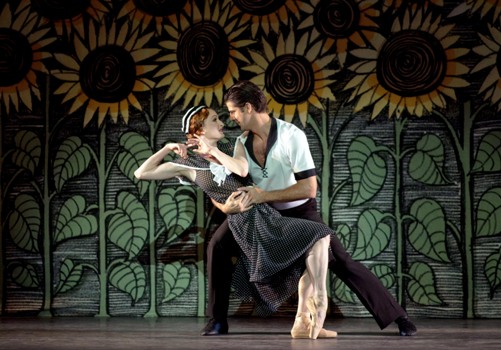 In an interesting programming juxtaposition, the Glorya Kaufman Presents Dance at the Music Center series’ current offering is ABT’s “The Bright Stream”; it follows last month’s performances of “Don Quixote” by Ballet Nacional de Cuba. “Bright Stream” is a full-length, Soviet epoch, “comic” ballet celebrating the Stalin-era collective farm. In 2003, well post-glasnost, it was re-choreographed by the Bolshoi’s Artistic Director Alexei Ratmansky. On the other hand, the Cuban troupe presented a purely classical interpretation of “Don Quixote” by Alicia Alonso (a Cuban, and once-upon-a-time ABT prima). When writing about “Quixote,” I commented upon the Communist bloc countries’ devotion to ballets celebrating “tales of wealth and privilege.” On the other hand, “The Bright Stream” may not celebrate wealth and privilege, but it is a fairly sanitized and beautified version of communal life. Not at all a propaganda piece for anyone, it definitely has its charms.

To tell the story is to become bogged down in silly, non-memorable details. Unfortunately, the choreography includes excessive pantomiming in an attempt to tell the story; in the process, it detracts. Act I, in particular, suffers from emphasis on the tale’s intricacies. While the dancing is the level one would expect from ABT, the emotional involvement of the dancers seemed nil. Little wonder. Fortunately, “Bright Stream” has an Act II. The humor is slapstick, much to the pleasure of the audience. The dancers are much more engaged in the nonsense of Act II’s silly disguises and entrapments. Their enthusiasm is palpable.

Paloma Herrera (Zina) and Gillian Murphy (the Ballerina) are both technically precise dancers and a pleasure to watch. The Ballerina, an old friend of Zina’s from ballet school, has come to entertain the peasants at Zina’s invitation. Zina’s husband, Pyotr (Marcelo Gomes) falls for the visitor but the two women, conspire to disguise Zina and she enchants Pyotr who falls in love with her again. The two women are beautifully matched dancers, which is essential to the plot, such as it is.

Other disguises are less subtle. Cory Stearns, the ballerina’s partner (en pointe and wearing a long ballet costume), seduces an Old Dacha Dweller. Stearns is hilarious in drag, blending classical technique with boyish vigor. He brings to mind the antics of Les Ballets Trocadero: the kind of slapstick that can only be accomplished by the very accomplished. For all out humor and disguise, Jared Matthews (the Tractor Driver … every collective needs a tractor driver or two) is hard to beat as a giant dog (though, to be honest, a slight change in the mask and he could have passed as a bear). His role is to protect the young milkmaid, Galya (Maria Riccetto) from another’s advances, which he does with great bravado, mostly on a bicycle.

I said I was not going to even attempt the story—trust me this is barely an outline—but here’s hoping it has given you the flavor. In keeping with the intricate plot, the Shostakovich score sounds like a movie soundtrack rather than something composed for a ballet. But “The Bright Stream,” for all its 20th-century roots, is still a very classical ballet. One could imagine another story transposed upon it, costumes from a prior era, and a different set and voilà, there would be no question but this was a classical ballet.

“Bright Stream” is a diversion and perhaps a good ballet to take someone to who has never seen a ballet. Surely your guest will be amused and the ABT level of dance will set a fine standard (note, there are four different casts in the Los Angeles run). For serious dance, however, in my book, the Ballet Nacional de Cuba’s Los Angeles performance set the barre much higher.