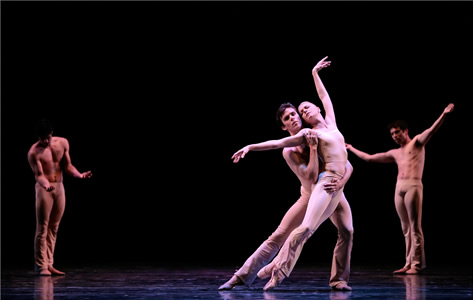 The title may have been Animal Magnetism, but it was the Ji?í Kylián /Igor Stravinsky combination that provided the allure. In a rare showing of Svadebka, Houston Ballet rocked the house with a superb performance of Kylián’s masterpiece set to Stravinsky’s Les Noces. Musically it proved a high point matched by Houston Ballet’s precise ensemble work.

Kylián dissects, fractures and reconstructs space through a kind of kaleidoscopic use of the group as one entity. It’s like seeing in multiple frames of motion at once. Mireille Hassenboehler and Simon Ball, as bride and groom captured the stark angularity of Kylián’s spatial architecture. Hassenboehler’s long-limbed stature and acute restraint captured Kylián’s harsh lines. Ball, also a portrait of economy, added a noble simplicity as the dutiful husband. Both give marriage the serious stamp that the choreographer intended.

The effect is of a great wall of movement from Kylián meeting a similarly great wall of sound in Stravinsky’s deliciously abrupt score. Power was present in the pit as well. The mighty St. Paul’s Choir (under Mark Edenfield’s expert direction), Tamara Wilson, Maria Markina, Beau Gibson, and Liam Bonner from the Houston Opera Studio, four outstanding grand pianists, and an unusual array of percussion, made the performance a musical tour de force under the confident baton of Ermanno Florio.

Stanton Welch’s Clear, a choreographic response to 9/11, dwelled in abstraction until the last section, where images of loss, falling bodies, and making contact rang true. Welch was living in Manhattan at the time and was about to begin work on Clear when the twin towers came down. It’s an unsettling piece that never truly finds a home in a particular genre. And perhaps that’s its strength. Life post 9/11 is unsettling to say the least. Welch’s ballet is mostly unadorned with occasional flourishes at the edge that seem to come out of nowhere.

Connor Walsh dominated (in a good way) with both his clarity and virtuosity. His kinesthetic charisma and razor-sharp attack fit Welch’s bare lines like a glove. Barbara Bears, the lone woman amidst seven men, transformed into a calming presence, a sign of hope, and quiet resolve. Bear’s tender yet understated eloquence touched a healing tone embedded in the ballet. The end—breathtakingly moving—poises Bears reaching skyward; a potent reminder of all that came crashing down that fateful day and the undeniable strength of the people left standing among the ruins.

Although not a technically perfect performance, the potency of Welch’s message came through in an understated elegance. A subsequent cast featured confident newcomer Joseph Walsh in his first performance as an apprentice, an ethereal Amy Fote in the role of the woman, and Randy’s Herrera’s robustly athletic dancing in the lead role.

In the family fun category, Christopher Wheeldon’s Carnival of the Animals delivered the goods in terms of short, perky variations, a smooth performance by author/ actor/now dancer John Lithgow, outrageously creative costumes by Jon Morrell, and Lithgow delivered a crisp performance as the night watchman and a hilarious turn as Mabel Duntz, the nurse pachyderm. His witty verses created the thread the wove the string of super-short dances together. Another cast featured Alley Theatre veteran, Paul Hope, in an equally strong performance. Hope’s baritone voice added a darker flavor.

Amy Fote turned on her acting charms as the aging swan. Hassenboehler and Ball brought out the more poignant tones in Wheeler’s choreography in the Cuckoo section, while Bears oozed delight as the kangaroo turned mermaid. The Busby Berkeley mermaid section provided a visual highlight. Wheedlon’s strength came through more in the sheer theatricality of the piece than the actual choreography.

(13402)
$48.99 (as of January 26, 2021 - More infoProduct prices and availability are accurate as of the date/time indicated and are subject to change. Any price and availability information displayed on [relevant Amazon Site(s), as applicable] at the time of purchase will apply to the purchase of this product.)

(4506)
$8.98 (as of January 26, 2021 - More infoProduct prices and availability are accurate as of the date/time indicated and are subject to change. Any price and availability information displayed on [relevant Amazon Site(s), as applicable] at the time of purchase will apply to the purchase of this product.)

(41289)
$9.98 (as of January 26, 2021 - More infoProduct prices and availability are accurate as of the date/time indicated and are subject to change. Any price and availability information displayed on [relevant Amazon Site(s), as applicable] at the time of purchase will apply to the purchase of this product.)
related posts