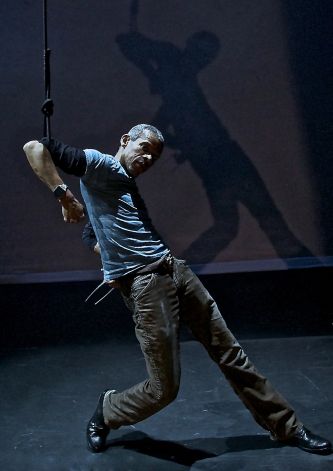 For its 10th anniversary season, the Black Choreographers Festival has extended into new and “other” dimensions. Under the leadership of Kendra Kimbrough Barnes and Laura Ellis, this performance included a dramatic work by Joanna Haigood, a ballet-jazz dance by Gregory Dawson, Barnes’ historical dance-drama, “Clearance: Linking our Passage,” and
a Haitian celebration by the Rara Tou Limen Haitian Dance Company. What a show!

For this reviewer, Haigood’s work “Dying While Black and Brown,” was the most sophisticated and well executed. Using an enclosed set piece by Wayne Campbell, four men in prison garb, climb, swing and fall within the structure. Later the garb changes to street clothes, and
although similar tensions evolve (one man “flips” out), and fights ensue, it is clear that in or out, these men are caught and bound. It is less a dance work than a dramatic portrayal of a contemporary enigma. The performers were James Antoine Hunter, Rashad Pridgen, Travis Santell Rowland and Matthew Wickett. The powerful score was by Marcus Shelby.

Barnes’ work (“Clearance: Linking Our Passage”) also dramatizes the African-American experience. In this instance, people from the south travel to the north with well-documented hardships. It is a work-in-progress, using a large cast and scattered moments of group ensemble that is to be completed in the fall of 2014.

The most complimentary remark I can give about Gregory Dawson’s “birds eye view” is that he enlisted a fine jazz ensemble of musicians, the Richard Howell Quintet. His six dancers — Isaiah Bindel, Jordan Drew, Ilaria Guerra, Byron Roman, Oliver Shock and Jessica Wagner — employed a dance vocabulary familiar in the Bay Area from the Lines Company; that is, ballet, modern, jazz, hip-hop, gymnastics and a continual barrage of wiggles, flops, falls, punctuated by multiple jump turns and pirouettes. It is all delightfully entertaining if you like TV dance, but after 50 minutes, watching each dance take a “jazz-riff,” the audiences’ restlessness was apparent. I believe it was once pronounced by Doris Humphrey, “All dances are too long!” This one is.

Portsha Jefferson’s lively celebrations, “Nasyon Dechennen (“Furious Nation”) portrayed various incidents experienced by native Haitians (kidnapping, repression) yet concluded with exciting, colorful, lively bouncing, turning, jumping ensemble revelry. Like other works on the program, it too could use editing, but all in all, it left the festival audience in an upbeat mood.

The Festival continues March 7 and 8 with Robert Moses’ Kin presenting “Draft/BY Series,” at ODC Theater in San Francisco. Barnes and Ellis are to be complimented and congratulated on their fine accomplishments for the 10th Anniversary of the Black Choreographers Festival.