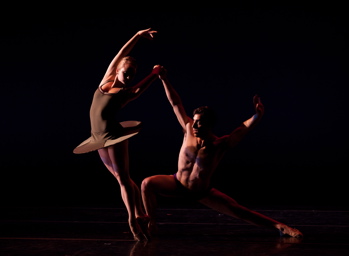 A scene from Gregory Dawson’s “which light in the sky is us?”
Photo by Rosalie O’Connor

Charles Anderson’s Company C keeps growing and going about trying new, complex choreographic challenges. For this Spring Program, which will be offered in New York May 18-20 and back home in Walnut Creek, May 25-27, Anderson presented not only his own work but that of choreographers James Sewell, Peter Anastos and Gregory Dawson. Of them all, Anderson’s work was by far the most innovative and well performed.

Anderson met Morton Subotnik (a recent “maverick” in the SF Symphony’s season) in New York and invited the composer to give him “Return: A Triumph of Reason II,” a duet performed by Kristin Lindsay and David Van Ligon. Dramatically lit by Patrick Toebe and cleverly costumed by Jan Berletti and Lynn Rothenberger, the two dancers perform a haunting work, indicating intimacy not realized, relatedness accepted but not accomplished. What was most pleasing were the stop-and-go dynamics and beautifully shaped designs.

“The Song Remains the Same,” the opening number, displayed the talents of Chantelle Pianetta in a jazzy show-off number, “Black Dog,” followed by the swift skill and splendid footwork of Oliver Freeston in “Rock and Roll.” For their finale, Pianetta and Freeston joined for “Babie, I’m Gonna Leave You,” a flirtatious escapade. Both dancers are very skilled: Pianetta would gain more stage appeal if she related more to her lively partner.

James Sewell’s “Late” was a pleasant tour-de-force duo for Jackie McConnell and Michael Galloway, both very skilled on the double level of mime and movement. The dancers gave the audience great fun as they portrayed the usual anxiety of waiting for reluctant partner. The company was in top form also for “Footage,” Peter Anastos’ nostalgic pieces to English dance-hall music. Freeston starts off with an “Astaire” opener, the guy in tails waiting for the right partner. As the girls emerge, he woos each one and finally gets the star, Edilsa Armendariz. Charming and lively as this work is, it hits this viewer with a problem of contemporary ballet: men are small; women have grown tall. Perhaps, since this piece is built around social dance styles, toe shoes could be abandoned so the heights even out and the lovely, long swooping lines could prevail.

The evening’s final work, “which light in the sky is us?” by Gregory Dawon to music by Ben Juodvalkis and Moses Sedler, left us confused. Men dressed in scanty trunks and women in leotards moved, mostly in the dark, to Sedler’s “Adagio for String Trio,” a rather morbid piece of music. It was difficult to find a through-line. The work began and ended with light circles moved across the stage; there followed some interplay with molded circles,which served as tutu skirts worn by men and women. There were also changes of costumes (the men wore short skirts for a while), but all in all, unclear. The last section “Luminescent Shower” seemed to involve an hysterical breakdown followed by “The Seductive Glimmer” danced by Kristin Lindsay, but what/why/and how come? that action did not become clear. The dancers are all to be applauded for valiant efforts, but the piece needs work. For this viewer, a more varied and thoughtful movement vocabulary, omitting the endless high kicks, pirouettes and extended leaps might help this (as well as all contemporary ballet) to extend and clarify dance art.

Congratulations to Charles Anderson for his ten years of carrying Company C to new levels of ensemble and dance performance.