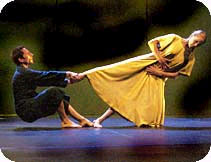 Modern Dance is an American hybrid, a form that is mostly defined as &#147;not ballet.&#148; Whatever it is, &#147;modern&#148; tends to reflect the personality of the choreographer and many companies carry the names of their founders. Cullberg Ballet is actually a modern company, one founded by a Swede name Birgit Cullberg in 1967. Although she stepped down as artistic director in 1985, the company survived under the leadership of well-known choreographer Mats Ek, until 1993, and thereafter, a handful of other choreographer/artistic directors have run the show. Judging from their current San Francisco appearance, the Cullberg aesthetic has been maintained with consistency. That&#146;s not necessarily a good thing.

There is something of Martha Graham&#146;s power, ground-oriented movements and narrative orientation to the work. The Cullberg style, however, is much more gestural,contemporary in the most cynical ways, and reliant on sets and costume changes over kinesthetic complexity. The choices of music, a string quartet by Jacob ter Veldhuis, selections by Arvo Part, others by Henryk Gorecki were all fairly bleak. One hesitates to make stereotypical statements about long Swedish winters and rates of suicide and depression, but the works on display did little to persuade audiences that the Cullberg representation of Swedish culture was anything but.

&#147;A Sort Of&#148; (1997) by Mats Ek at least broke out of the somber tone of the two pieces preceding it to end the evening with some wildness and life. Whether it was the popping of balloon-inflated body parts, the destruction of its own little Berlin wall, or the mass of bodies rolling across the floor in high velocity, the piece built its excitement. Of course, it was all a dream. The main character ends-up where he started, curled up on the floor snoring.

Real life tends to get in the way of these dances. The focus on doorways and relationships, the endlessly quirky quality to the movement comes without a deeper sense of movement inspiration. In &#147;Solo for Two&#148; (1996), Ek has his desolate couple crying, running, counting fingers, looking at their watches, coughing and holding their stomachs between steps.Angst is omni-present. Gunilla Hammar and Boaz Cohen are both veteran dancers in the company and present their roles with great commitment; it&#146;s just the choreography with its relentless quirkiness that adds up to a "so what?"

&#147;Out of Breath&#148; (2002) was choreographed by Johan Inger, the current artistic director of the company. Heclearly falls into the same patterns as his predecessors, including reliance on walls and doorways and men in dresses. Here, at least, several of the performances were of the go-for-broke variety that made choreography irrelevant. The dancers in the company, an international lot, clearly deserve better.