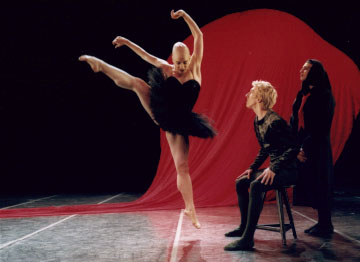 Sweden&#146;s Cullberg Ballet was founded in 1967 by Birgit Cullberg, a modern dancer who had studied with, among others, Kurt Joos and Martha Graham. She built a small company that performed works favoring a strong dramatic and psychological content. She was succeeded as director of the company in 1985 by her youngest son, Mats Ek. Ek directed the company until 1993, producing works notable for their social commentary and political content.

The company is on a world tour with Ek’s 1987 reworking of Swan Lake. Ek has chosen a contemporary approach to the story of Swan Lake, turning the ethereal swan into a sturdy creature not unlike a &#147;down-to-earth Swedish lass of today.&#148; In this version of the story the prince still seeks his ideal mate and rejects his mother&#146;s attempts to present him with a future bride. However, the Queen mother has become a single mother who entertains a lover the prince despises (a King is not present in the original Swan, so this is a plausible approach). She also presents the prince with a chosen bride, &#147;a pale copy of herself,&#148; instead of offering the prince several candidates from which to choose.

The prince embarks on a reverie and journey, dreaming of his ideal mate (the white swan) and finding ugliness in the world (men who treat women badly). Then he discovers a black swan who turns out to be like his ideal white swan. By making these few changes to the story, Ek has succeeded in stripping the story of its mythic struggle between good and evil and replaced it with a mundane tale of a boy&#146;s rebellion against his mother.

Ek came to dance rather late after a career that began in the theater. His choreography is an amalgam of ordinary movement and some balletic flourishes.One of the best moments in the production is a dance to the famous music of the cygnets (Act II), now performed by three women called the three ducks, probably for satirical reasons. Their quick, well-timed routine was amusing.Less entertaining, and not particularly revealing, were all the pelvic thrusts to be seen throughout the evening. This obvious, puerile approach to demonstrate the primal urge of sex dominates the production and seems designed to shock. (If this assessment is accurate, it is startling, coming from the country that is home to Ingmar Bergman.) Ek emphasizes the ordinary and the obvious to strip a classic of its stature. Instead, he reveals how little he has to say, not to mention the paucity of his imagination.

The dancers performed with conviction. The set and costume design by Marie-Louise Ekman showed a pop art sensibility. The music was taken from a recording by Gennadi Rozhdestvensky and the Moscow Radio Symphony Orchestra. The first two acts, while abridged, were left in approximate shape.The last two acts were completely rearranged, with the interpolation of a Jewish melody to accompany a totally extraneous dance by two Hassidic men around a clock face. As the music fell apart, so did the production.