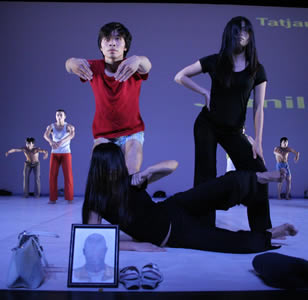 Company Ea Sola is a French-Vietnamese fusion. Thematically, things are 100% Vietnamese—there still seems to be no escape from an association of this particular country to war. The French part comes in the style and choreography. ,Sola left her native country in 1974 (Saigon fell in 1975) and spent the years between 1978-1990 in Paris, working with theatre director Jerzy Grotowski , creating underground “happenings” and discovering her own voice as an artist in a series of pieces around the “States of the Body” theme—not political-sounding in the least. Returning to Vietnam in 1990, she received research grants to study her own country’s traditional dance and music forms, and her newer work is clearly influenced by this.

“Drought and Rain Vol. 1, ”(not being performed in this engagement) which Sola began creating in 1991, featured performers who were non-professional artists, elderly women Sola encountered out in the countryside villages who had been dancers years earlier, before the consequences of war had forced them to stop. In Vol. 2, things are more post-modern as well as post-war, with nine dancers from the Vietnam National Opera Ballet, Hanoi, and an on-stage group of musicians and singers playing traditional instruments, offering grounding to the highly stylized, modern-looking production Sola has created.

A downstage row of framed 8×10’s offers headshots of (dead?) Arabs, Africans, Asians and even a white man with a soldier’s haircut. Graphics telegraph song lyrics across a screen, and the women dance with their long black hair almost always covering their faces. The men are skinny with their shirts off, and walk, collapse or fly through the air in sudden bursts of martial arts bravado,. There is pedestrian movement, a use of space that is politely geometric, very little partnering, and a lot of theatrical gesturing. “Drought and Rain. Vol. 2” is all heaviness, a requiem for a war before these dancers’ time,. But for all its modern look, the dance never seems to suggest that 30 years have passed, that there is peace.

In Japan, a post-war dance-form, Butoh, created a visual Hiroshima– those white-powdered ghost-dancers expressed the essence of a horrible period of time. Sola’s work lacks that kind of originality, it never coalesces into a strong statement or feeling. All art comes from malaise, but the mission of the artist is to transcend that.