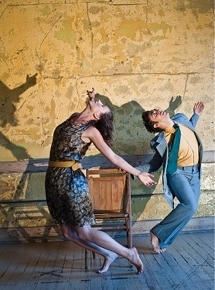 What’s Old Is New: Drama and Performance in Dance

It seems we are in the seventh cycle in contemporary dance, if not further. Beyond the aesthetic and social protests of the earliest modern dance “movement,” American choreographers have explored narrative dance, “pure” dance, “pedestrian” dance (wherein dance-movement looked like, but isn’t everyday movement), and a period of contact improvisation and technique for virtuosic display. Now it appears that dramatic dance has re-emerged on the boards, although, in its mixed-media form, it’s called performance art.

sjDance, a dance company in its eighth year in residence in the Dance Program of the School of Music and Dance at San José State University, is directed by Gary Masters. Masters served as artistic associate of the José Limón Dance Company and of the Limón West Dance Project. It is fitting then that sjDance keep the Limón repertory alive, in this performance staging “There Is a Time” (1956) and “The Waldstein Sonata” (1996). Limón, who is probably best known for his dramatization of the Othello story in “The Moor’s Pavane,” brought lyrical dance to a heightened state with his ability to build character and relationships through gesture, space shapes and musicality. All this was beautifully illustrated and executed in the 12 sections of “There Is a Time,” a work inspired by Chapter 3 of Ecclesiastes. The dancers moved from the large circle through the many themes cited in the text: e.g. “a time to be born, a time to die.” All are accomplished performers. I was moved by Dominic Duong, in the section cited above, and by Maria Basile ‘s laughter in “a time to laugh… a time to dance.”

Other company members are Heather Cooper, Nhan Ho, Hsiang Hsiu Lin, Joshua Lau, Dominque Lomuljo, Marte Madera, Mike Saenz and Vicky Alvarez. Since I had studied with Limón and had seen this dance many times, it was a great pleasure to be reacquainted with its power and choreographic craft. The San José Chamber Orchestra played the Dell Joie score with aplomb.

Similarly, but more as a musical offering, sjDance performed “The Waldstein Sonata” (Beethoven) as its opening number. Limón choreographed it, but it was completed by Daniel Lewis, a member of the New York Company, in 1996. To the excellent playing of Helene Wickett at the piano, sjDance beautifully illustrated the musical themes, complete with Limón’s characteristic movement lines, under and over curves, sweeping leg gestures and group interaction. The program included two original works, both dramatic and effective. Hsiang Hsiu Lin built a piece called “The Funeral” that was both sad and funny in its portrayal of a soul guided to another world. Maria Basile’s “Inner Edge” was a portrayal of Nelson Mandela’s struggles. Three figures illustrated the range of emotion in that heroic story: Dominic Duong, Hsiang Hsiu Lin and Mike Saenz. Congratulations to Gary Masters and sjDance for a wonderful dramatic evening!

Yannis Adoniou’s work for his company, Kunst-Stoff, moves in an open direction, depicting not story nor narrative, but a series of events of a personal nature, reactions to music, mood or interpersonal interaction. Entitled “Rebetiko,” the work takes its inspiration from Greek music “born out of sorrow, pain, desire and yearnings of a people.” The dancers move in front of and behind a beautiful screen that both defines their space and sometimes illuminates them as in the section “shadows.” Each of the dancers had solo moments evoking a series of laments, episodes of isolation, loss and regret as if they were street people who can only respond in movement. Chin-chin Hsu traveled a lit path with an off-balance sense of wandering. She also balanced a light on her head in a long magical “witch dance.” Daiane Lopez da Silva did a “simmeringz” solo and Julia Stiefel intrigued us with a topless number—her back to the audience. Finally Daniel Howerton and Marina Fukusima developed a long duet of attraction and repulsion that ended with Howerton down and out, as the cast gathered around him.

Each dancer had a unique ability to portray the songs by Minos Matsas, sung by Catherine Clambaneva.Adoniou notes: “Minos Matsas is a major composer in Greece and his grandfather wrote originally some of the text to the songs we are using. Minos’ contribution to the work gave life to the story.” I have just read the lyrics of those songs. Had they been printed in the program, we might have had a deeper sense of the various moods. Clambaneva participated in the stage action and provided a resting place and point of focus for dancers when they were not dancing. “Rebetiko” is a haunting work, which we need to experience again and again to get the full resonance of the cast’s artistry and Adoniou’s choreographic ability. The light and shadows were produced by lighting designer Lisa Pinkham; Stage design was by Yannis Adoniou and Lisa Pinkham, with costumes by Adoniou.

In “Our Body Remembers,” Ben Levy “explores the ancestral intelligence hidden in our bodies.” It is a challenge to deal with such a specific realm of data, but Levy has contrived to employ video, drawing, dramatic interaction and a score created by DJ Mason Bates and performed by the Kardash duo, Marty Huerta on acoustic guitar, electric sitar and Murat Bayhan on doumbek, drums and percussion. This mix evokes some of the ethnic Persian pathways Levy traces with his dancersAline Wachsmuth, Ali Schechter, Morgelyn Tenbeth-Ward, Bianca Cabrera). After dramatic play during which Wachsmuth was teased with pieces of ripped paper, she performed an amazing act: she wrote and drew on papers that she attached to her chest, evoking statements of self and family. All messages were drawn upside-down from her perspective so we could read them right side up. It gave us one way a body remembers.

Bianca Cabrera maneuvered a solo for hands, displaying complex variations on the use of fingers and palms, almost plaintively asking how hands could know and do their many tasks. Cabrera also did a solo with her shirt off. The dancers went through stages of dress and undress ending in black bikinis and executing ‘shimmy’ moves reminiscent of belly dancing. Is that an echo of Persia? For this reviewer, “Our Body Remembers” could use more extensive research into whole body activity, more extensive dance/theater skills and fuller use of the ensemble. Are bikinis “ancestral intelligence”? Where are the masculine memories? Can verbal messages be translated into dance/movement? Is there a collective “body,” or does each individual carry traditions and kinesthetic patterns that evoke personal tradition?

The set and lighter designer was Sarah Phykitt; costumes were by Bianca Cabrera. Levy used selected and edited text from Jalal ad-Din Muhammad Rumi. “Our Body Remembers” is a fascinating investigation into a subject that could develop into a larger, complex theater piece along many more intricate pathways.