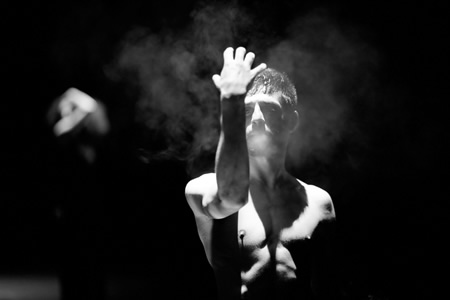 A new wave of contemporary dance is heading from Europe and sweeping America these days instead of the other way around. Emio Greco/PC exemplifies the kind of work being snatched-up by American programmers and dropping seeds of influence around the US in places like Stanford, where a semi-captive audience is open to unknown commodities. Greco/PC is also very EU– it is a state-supported Dutch group run in part by an Italian dancer/choreographer, with performers from seven different countries.

Judging from “Hell”, the 90-minute work shown in Palo Alto, this is a multi-disciplinary choreographer who take a global perspective—the work well reflects the intensity of this moment in history as much as it suggests itself to be a tour of the underworld. Things are theatrical, heady, layered with imagery, great lighting, sound and movement to create something at once powerful and inexplicable. It’s a post-9/11 world full of non-matching dancers, a rag-tag gang of individuals who whip off their clothes as easily as they toss off difficult choreography. Like a ballet-trained Butoh company, Greco/PC gives good angst.

“Hell” the dance, is quite edgy and discomfiting. The pleasure of the experience lay, mostly, in the purely kinesthetic charge of energy that hangs over the proceedings like a neon cloud. With dancers such as Vincent Colomes and Sawami Fukuoka, there is also the pleasure of watching fully-realized, extreme movement. Greco himself, a striking dancer, plays a central figure, perhaps “THE” central figure, presiding over an archway of blazing lightbulbs, a Becket-worthy tree, and a darkened playing space filled with shadowy areas and partially visible figures.

Like the European sensibility in literature, there is more than a whiff of deconstruction here. Doesn‘t the subject of hell lend itself to such an approach more than just about any other, however? Who would venture to describe such a thing in a dance? Greco would, and he would even go so far as to tackle choreographing to Beethoven’s 5th in order to take things to a logical extreme.

If Mark Morris, Paul Taylor, Merce Cunningham and all the other marketable American choreographers out there could take anything from this new multi-arts sensibility, what would it be? Perhaps an idea—that virtuosity and music can serve more than a dancer’s need to be challenged, or a choreographer’s need to feel creative. There is plenty of virtuosity here, but there is also a pre-show karaoke dance where everyone has a chance to cut-up and vamp to disco classics like, “Pink Cadillac”. It’s pre-hell, cupcakes before execution. An amuse bouche. Then comes the bloody meat.