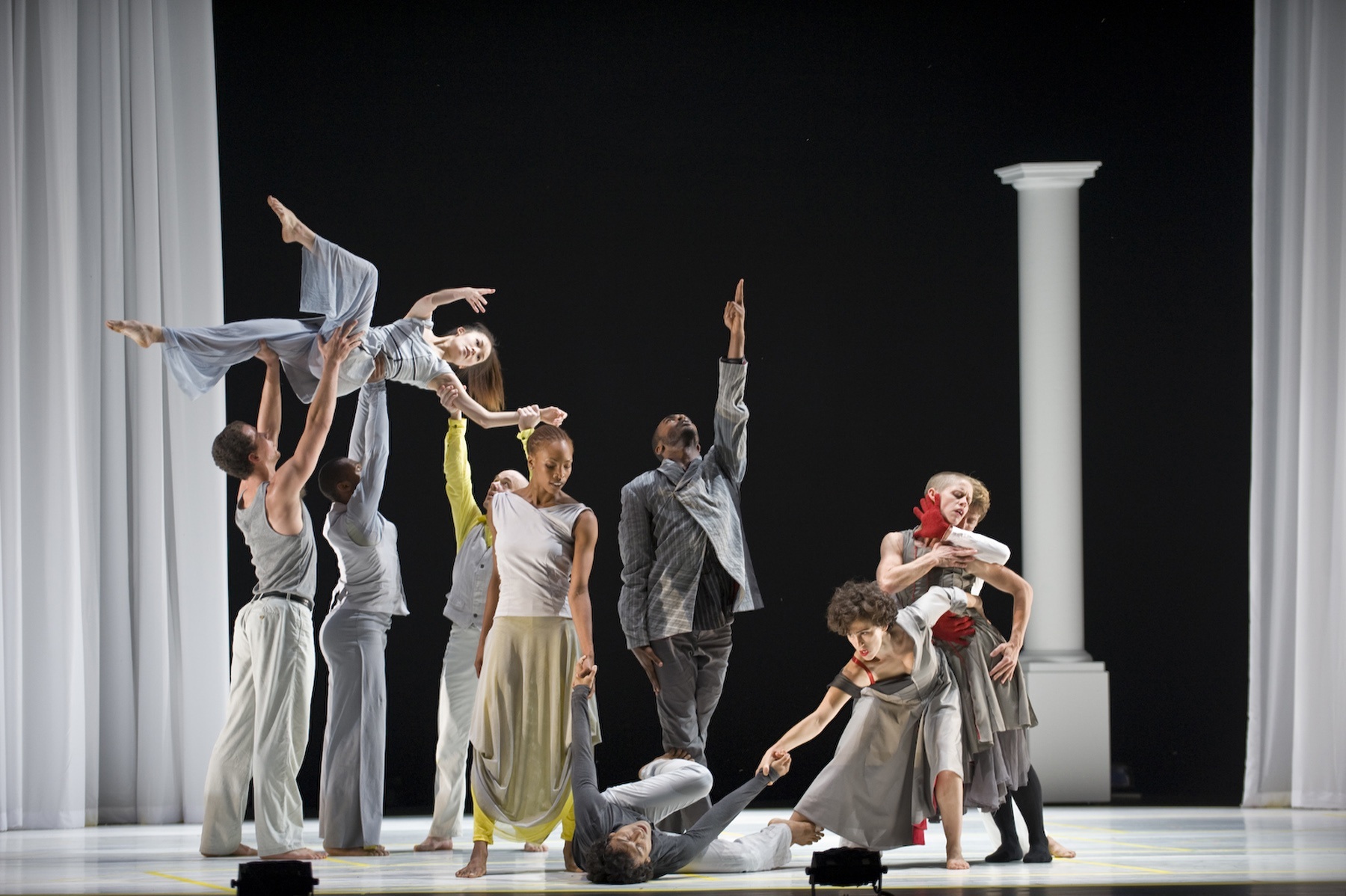 When choreographer Bill T. Jones speaks, his voice resonates soulfully, with a depth and crisp tonality that is instantly captivating no matter what he is saying.  His words are concise, visually eloquent, often inspiring the next and bigger question – individually and collectively. When he pauses the silence is full of escalating momentum.  Jones is bigger than life, a kinetic genius, an urban visionary with a distant connection to plantation slavery – something “he cannot remember but some how cannot forget.” As a transmitter of all that is creative and worth consideration, he is both a MacArthur “Genius” Award recipient and the perfect dance icon to tackle a dance/theater project honoring the bicentennial of Lincoln’s birth.

Fondly Do We Hope… Fervently Do We Pray (taken from Lincoln’s second inaugural speech) is artistically and socially the “Yes we can!” of our generation, a synchronistic happening that links America’s civil war past with today’s racial, economic, ideological division, and looming violence.  It’s a tribute to the 16th President who freed the slaves under the current Presidency of America’s first black president yet, surprisingly, with its overriding narrative that is sung, spoken, and video-projected – avoids the heavy-handed and is often ephemeral.

Certainly Jone’s most ambitious and challenging undertaking, Fondly Do We Hope… Fervently Do We Pray literally starts with an assassin’s bang or the blast of the first civil war cannon, and ends with an explosion of a full theater in standing ovation.  What takes place in between is a performance where each layer adds to the whole, relentlessly held together by the mastermind of a multi-dimensional vision.

Bjorn G. Amelan’s eloquent sheer oval scrim and moveable white columns is the stage’s centerpiece, strikingly lit in blizzard white by lighting designer, Robert Wizerzel.  The snow-white-oval gauze curtain is itself full of metaphor, suggesting at once the White House, the Lincoln Memorial, and even the formal shape of a Lincoln’s top hat.

Across this elliptical scrim Janet Wong’s ominous video projections sail like thunder clouds, fleeting ghosts and gigantic silhouettes.  At times the narrative is hand written over this thin veil of reality, then erased like an etch-o-sketch, or, transformed into Lincoln’s titanic silhouette – a presence that walks unabashedly across both stage and dancers.  To these precise technical images and set floats Lindsay Jones’ distinct sound design of a haunting chugging ghost train or snapping arsenal.

Equally stunning and dramatically charged is Liz Prince’s wardrobe design in Banana-Republic-hues of white and grey punched with red or black accents.  Mary Lincoln (the intensely passionate – “I’m ready for my close up Mr. DeMille” – Asli Bulbul) is outfitted in a sultry 50’s styled cocktail dress with vivid red underlining in act one, then in act two, sports a black-mourning-period dress, that at times, causes her to be magically swallowed up in the black hole of the stages shadows.  The visual imagery of costuming alone is as classic as when actress Holly Hunter collapses into the waves adorned in a similar period dress in Jane Campion’s, The Piano.  And, when Lincoln (Paul Matteson) dances in an all white outfit with equally intense red gloves they speak volumes as the mark of Cain, the blood-stained hands of a nation, or that of the fading life line of a fallen President…

Within this fully realized staging and costuming, dancers perform behind and in front the oval sheer monument, or get birthed from its womb-like-opening for a procession of tableaus or solo performances.  Superbly they dance abstractly to the text as if their movement generate the prevailing narrative, avoiding being weighed down by it, or succumbing to literal translation other than the pointing of a finger, the turning of a head, or a lifeless body lifted on sky reaching arms.

The company dances Lincoln’s history, Bill T. Jone’s history, and unintentionally the inferred history of Barrack Obama.  They dance mini biographies of less famous and unknown others and with each scenario tell something about the Lincoln alive in each of us:  The father Lincoln who lost all but one of his four sons, the mortal Lincoln – a life framed by death, the emancipator Lincoln who saw injustice and took a stand, the assassin Lincoln who in taking a stand caused the slaughter of a good deal of our nation…

Yet, within all of this – plus the layers of American folk tunes and spirituals, banjo strumming tambourine beating, Jesus-Lincoln-Christ-Superstar live performances, the words of Walt Whitman, inauguration speeches and the King James book of Revelations – there is still space for the majestic presence and talent of dancer, Shayla-Vic Jenkins to shine.  As if the space she is held in and moving through is a pregnant pause in Jone’s voice.