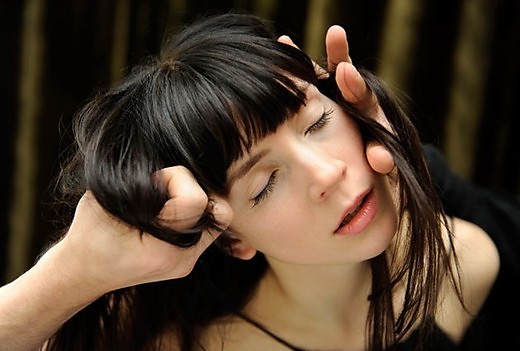 In historic terms, Poppea skillfully navigated Nero’s Roman court as his mistress, but in Norwegian choreographer Ingun Bjørnsgaard’s modern dance theatre production Poppea, the woman is portrayed at best as a Freudian hysteric, at worst as a Sharon Stone wannabe.  Either is a stereotypical version of woman as fruit basket or as executioner.  A woman can be powerful, and Nero’s mistress, without being nuts.

The person who carries the show, who adds depth and magnetism, as well as powerfully nuanced dancing, is Erik Rulin as Nero.  Of the five ensemble members, Rulin understands Bjørnsgaard’s vision and movement the best.  When he performs a handstand and flips slightly to the side, to glide gently to his stomach, we see Nero passing the bedroom door of Poppea, his favorite mistress.  When Rulin rolls his shoulder and then twitches his elbow, we see the accused pounding of Poppea’s pregnant stomach.  And when Rulin tiptoes across the stage, campy style, we see the intrigues of the court.

Monteverdi’s original operatic score for Poppea is occasionally interlaced with Norwegian Geir Jenssen’s score.  Through Jenssen’s electronic heartbeat, we see Rulin’s heart pounding not because he is breathless but because power makes him conscious of life.  Rulin deconstructs the silliness to show us a reason why dance exists:  to make visible to the eye what beats inside the human heart.

I wanted to see this intrigue from Poppea herself; unfortunately, the choreography looks oddly un-kinetic, and it is not entirely clear which of the two possible women is actually Poppea.  The one with the knife?  Do two women represent Poppea?  The jagged elbow motion down into the belly is a motif but is not developed enough to carry forward into pathos.  Squirmy spasms suggest neurosis but are also undeveloped.  And when dancers begin throwing empty beer cans onstage, I did not understand the point of littering.

The mosh pit made more sense, in a grungy way, but it seems old hat to watch Romans roll all over each other.  Post-modern Romans probably have something to say, so it feels like a choreographic shortcut to make a lump of dancers yank knees and legs around, particularly when one of them is wearing a Playboy bunny suit.  Set and costume designer Thomas Björk places velour-covered rocks onstage, which double as a bed and caves, respectively.  But Aleksandra Sende is a fine dancer, who stays centered amidst the pull of gravity, so why hide her legs and torso with baggy pants that make even walking look awkward?

Surely there is deeper terrain inside Poppea than a woman who wields a sharp object above a pillow or looks crazy-eyed at the audience.  Yes, a creative, intelligent woman can become her own worst enemy—a woman who hates others and loathes herself.  Misdirecting her intelligence and creativity, she batters herself, her friends, and her partners, not to mention her in-laws, unable to find an inner sanctum of grace either because she lacks one or because love is too painful.  She is the narcissistic female, and we recognize her as she badmouths anyone to everyone.  Instead, in Poppea we find the stereotyped female, but we crave more than the tired, old trope of a mistress gone batty.  Plus in a show with a woman’s name as the title, with the possibility of bringing the back story of imagined women’s history to the forefront, why have the strongest feature be a man?