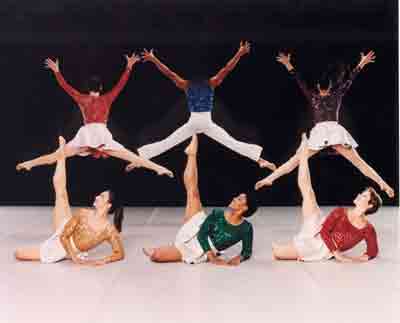 The music from the program is included in these CDs:

As the opening attraction of the Cal Performances 2002 season, the Mark Morris Dance Group offered an evening of light diversions. Most evident was Morris&#146; ability to hear music and render it in illuminating physicals terms. His innate sense of humor and his freedom from conventional strictures enable him to summon unexpected observations. No matter what kind of music inspires him, the ideas that flow through his movement reveal human relationships in often wry detail.

The main attraction of the evening was the world premiere of &#147;Something Lies Beyond the Scene&#148; set to William Walton&#146;s Fa�ade.Inspired by the almost-nonsense poetry of Edith Sitwell, in the early 1920s Walton composed a divertissement of musical jokes, mimicking popular music of the day. There is an atmosphere of music hall entertainment, not to mention general zaniness. In 1931 Frederic Ashton had one of his biggest successes when he created a ballet to this score, capturing the tone of the music in a series of vaudeville-like turns. It remains in the repertoire of the Royal Ballet and used to be performed in the U.S. by the Joffrey Ballet. Four dancers (including Mark Morris) read the poetry. The rest of the company cavorted through a series of vignettes that took their inspiration from the music and the words. It is a stripped-down and modernized version of what Ashton perceived.

The evening began with &#147;Resurrection,&#148; created in homage to Richard Rodgers&#146; centennial. It uses the Slaughter on Tenth Avenue music, which began as part of the 1936 musical On Your Toes choreographed by George Balanchine, who later made it into a ballet for his company, the New York City Ballet. Morris eschews the plot of the actor chased by gangsters, but retains the element of murder.He has envisioned a reverie of dancers clad in bold black-and-white pajamas (Isaac Mizrahi&#146;s witty designs). The woman of the leading couple is felled by the first gun shot, causing her partner to &#147;search&#148; for her. As they are reunited, shots ring out again, and this time he is felled.A corps of dancers provides a Busby Berkeley-like backdrop, replete with unison wave movements and the characteristic star pattern created by bodies lying in a circle on the stage floor.The movements echo the period of the music, with repetitions cleverly timed to the music. There is a sweet nonchalance to the piece.

Three other short works completed the program. &#147;A Lake&#148; is a stylized, courtly trifle in which dancers dressed in ballet-peasant costume engage in flowing, changing patterns that have a formal, 18th century feel. The music is Haydn&#146;s Horn Concerto No. 2. The most sober piece of the evening, &#147;Foursome&#148; takes two male couples, who interact with each other to music of Satie and Hummel. Is it an older couple and their younger selves? Is it a commentary about friendship? Morris and Guillermo Resto, his longstanding company member, were the &#147;older&#148; couple, moving with less fluidity than their younger counterparts. Morris&#146; understated, deadpan humor, brought laughs with his less-polished movements.Concluding the program in a flash of bright sequins, &#147;Lucky Charms&#148; took Ibert&#146;s Divertissement and matched the bubbling score with energetic movement. The dancers wore sequined tops: the four men in bright blue, the eight women in pairs of red, green, purple and gold. Morris plays with the musical parodies of the score, filling the stage with bursts of action like a dancing Christmas tree.