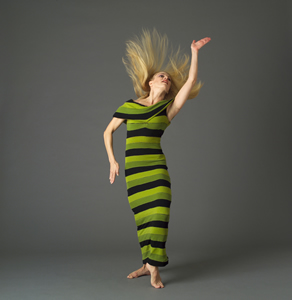 So what do we do with Martha Graham Dance Company now? It has receded from the brink of financial disaster enough to mount a two week run at the Joyce Theater. The level of technique is high. Artistic Director Janet Eilber’s imperative of making the work accessible has been mercifully reduced to a nightly preamble by a guest celebrity, and a pleasant three-part homage to Lamentations by contemporary choreographers Aszure Barton, Larry Keigwin, and Richard Move. And yet the company faces not insignificant problems in this time of positive transition. Many of Graham’s early works are masterpieces, yet they feel ancient, and not simply because they tap Greek mythology. Is it enough to remind ourselves that without Graham, we may not have gotten Taylor, Cunningham, Hawkins, Tharp, Ailey, and their successors—modern as we know it, in other words? Should the company keep trying new commissions, even if they are unsuccessful?

There is also a stoicism to many of the dancers that makes it feel like they’re working very hard onstage. No doubt this is true, but need we be reminded of it constantly, without the reward of a transcendent moment every now and then, as the now-departed and sorely missed Fang-Yi Sheu provided for a number of years? A few of the dancers are approaching the level where technique is not fought for or battled, but ridden like a surfboard on a wave. The tall Katherine Crockett may not be the fastest or most precise dancer, but she lends the movement a welcome plushness, softening the hard edges that many others seek to emphasize, and her line is nonpareil. (Move acknowledges this in his segment of “Lamentation Variations,” a solo for Crockett.) Tadej Brdnik, after seemingly circling the technique onstage in past performances, now has tamed it. His muscular build suits it well, as does his regal attitude. Carrie Ellmore-Tallitsch has a lovely serene bearing, and she transcends the busywork of what she is doing moment to moment, concentrating the essence.

The rest of the company is technically admirable. Jennifer DePalo and Elizabeth Auclair have a number of lead roles, and both could not be stronger, but their performances have a brittleness and are devoid of joy. At this point, will they ever find what it takes to rise above the physical work of Graham’s dancing, or at least make us feel as if they have? Maurizio Nardi’s long limbs make beautiful taut-bow shapes, but his mugging and propensity toward flamboyance are sometimes distracting. David Zurak starred in many dances, but he looks mentally shackled, unable to force his face into anything other than grim determination.

Appalachian Spring brought together all the best things about Graham, as perhaps it always has—brilliant compositions both austere and florid, strong characters, Noguchi’s sets, and among the most musical choreography Graham ever created, thanks to Copland’s commissioned score. The American pioneer spirit still feels fresh, perhaps because it remained romantically remote as it passed from hearsay to mythology in a quick century or two while avoiding most of us. The contrasting sections of Sketches from Chronicle make for a perfect pace; its kinetic and sculptural metaphors still read clearly. But the mythology dances seen this season feel like museum pieces — Embattled Garden (Eden), Errand into the Maze, Night Journey — although Noguchi’s sets and Graham’s costumes are always impressive. And while Graham herself turned down an invitation to perform in Germany at the 1936 Olympics because she didn’t want to condone the political status quo, the end of Acts of Light seems to be bizarre propaganda for Graham’s dogma. It is a medley of classroom exercises, performed in unforgiving gold unitards, and probably does more to forge company unity than elucidate the technique.

It’s impossible to erase the image of Graham herself in a number of these roles — her image is so very haunting and iconic; even the womens’ hair buns are apparently mandated as part of the costuming. It’s a worthy modern day myth: the company is nothing without the omnipresent ghost of Martha, and yet it is overshadowed by her. And yet the company is in a hopeful state; it has the technique, now more of the lead dancers need to find the spirit of Martha deep within. Brilliant, transcendent performances can shake the cobwebs off of these museum pieces.