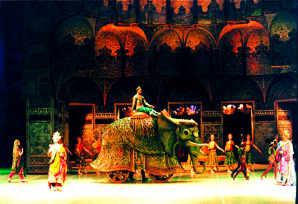 Most things in life suffer from an excess of anticipation. But the long-awaited, much ballyhooed visit of the Paris Opera Ballet to San Francisco exceeded anything you might have expected. Sponsored by the home team, which travels to France next week to fill the toe shoes of the Parisians in a kind of balletic cultural exchange, the French company dazzled audiences, setting a new standard for grace and elegance in a town that already holds dance close to its heart.

The Paris Opera Ballet is simply astonishing. Precise pointe work, ballerinas with impossibly long arms and fluid lines, danseurs who leap high into the air only to land nimbly upon another step &#150; all show the discipline and grace of one of the oldest companies in the world (think 1661). It is the site, in fact, where classical ballet was born. The fact that almost all the dancers have been trained in the company&#146;s ballet school contributes to an unusual uniformity of performance style.

The late Rudolph Nureyev was director of this troupe from 1983 to 1989 and remained principal choreographer until his death in 1993. As their calling card, the French dancers presented his swan song, the full-length staging of La Bayadere, after the original choreography by Marius Petipa. It is paired in the seven-performance engagement with Le Parc, by the contemporary French choreographer Angelin Preljocaj.

Bayadere is an exotic fantasy, a dream of the Orient concocted by Europeans who probably had never been there. Rich, opulent fabrics, bejeweled headdresses, sets that take off from the Taj Mahal, all provide a lush feast for the eye before the dancing ever begins. The hero rides in his betrothal procession on an enormous wheeled elephant, a gilded slave is carried across the stage on a palanquin and an appearance is made by a very realistic &#150; if dead &#150; tiger. In short, everything you can imagine India to be, only more gorgeous and without the poverty.

The plot is simple, although it takes almost two and a half-hours (plus two intermissions) to unfold. The warrior Solor is in love with Nikiya, a priestess (bayadere) who guards the sacred temple fire. The stony-faced Grand Brahmin desires her for himself. When the Rajah offers his daughter to Solor in marriage, the jealous Brahmin spills the beans about the hero&#146;s secret love and the royal family begins to plot Nikiya&#146;s downfall. At the wedding celebration, the bayadere is forced to dance for the guests and then presented with a basket of flowers. A serpent, hidden among the blossoms, stings her and, despairing of Solor&#146;s fidelity, she refuses the Brahmin&#146;s offer of an antidote and dies. The final act is a traditional &#147;white&#148; ballet, with a large corps in tutus. The guilty and grieving Solor has an opium-induced dream in which he visits the kingdom of the shades and encounters Nikiya, who, in the manner of true lovers, forgives him after a lengthy and wonderful pas de deux.

There are more shades than those of Act III in this work. A jealous scene between the princess and her rival echoes Verdi&#146;s Aida and the third act is one degree of separation away from Giselle, as is Nikiya&#146;s dance of death at the end of Act II. But one forgives the derivative nature of much of this work (as well as Ludwig Minkus&#146; second-rate score) in light of the magic of the whole.

The first act is largely expository, with much pantomime employed to convey the story. It is with the second act and the wedding divertissements that the real dancing begins. Jeremy Belingard was Tuesday night&#146;s athletic Golden Idol, displaying an amazing elevation, and the leggy Marie-Agnes Gillot as the princess Gamzatti finished off the pas de deux with her bridegroom (Jean-Guillaume Bart) with a dazzling succession of pirouettes. But, in the end, the act belonged to the title character. The lovely Agnes Letestu projected Nikiya&#146;s agony of betrayal with some of the most elegant dancing of the evening.

More elegance (perhaps the hallmark of the Paris Opera Ballet) was unveiled in the final scene. The slow entrance of the white-clad shades, as they make their way down a ramp with a series of arabesques, is familiar to balletomanes. Extrapolated as a separate offering by numerous ballet troupes, including San Francisco Ballet, it can be a pretty piece of fluff, rather in the style ofLes Sylphides. But, with the context of what has gone before, it is a powerhouse. In addition to wonderful ensemble work by the large corps de ballet and a bravura pas de deux for Nikiya and Solor, the act is built around three exquisitely calibrated variations, done by Eleonora Abbagnato, Laetitia Pujol and Muriel Halle.

It was like a dream and, unlike poor Solor, we didn&#146;t have to do opium to experience it. Nevertheless, it was hard to walk out of the Opera House fantasy into the real world.