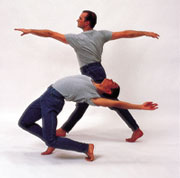 A former member of the Martha Graham Dance Company and a student of Merce Cunningham, Pascal Rioult founded his company, Pascal Rioult Dance Theatre, in 1991. He and his associate artistic director Joyce Herring (also formerly with the Graham Company) have assembled an attractive company of four men and four women, all of whom are accomplished performers. Rioult and Herring also danced in one of two new works on the current bill, the most Grahamesque piece of the evening entitled Prelude to Night. All four dances on the program were set to the music of Maurice Ravel.

Rioult unabashedly favors meaning for his dances and often provides an introductory note to a dance to explain his intentions. He blends dramatic, even painful, subjects with a leavening quotient of lightness so that the effect is not ponderous. His dances have a strong structural base; the shapes and patterns he creates for his dancers are clearly defined. His movement vocabulary is varied, sometimes lyrical, sometimes mechanistic and repetitive. It is clearly his own, not mimicking his Cunningham and Graham roots, and represents an appealing talent.

Wien, set to La Valse, made the strongest impression. Beginning with a huddled group of dancers on a dark stage, Rioult moves the group as a unit with short, rapid steps, circling the stage like frightened zombies. Whitney V. Hunter dances a nervous solo. There is an air of violence, which erupts sporadically. Then, near the end, the mood shifts momentarily to joy before a violent conclusion. Rioult&#146;s invention matches the music without being slavish, sometimes working in contrast to what is heard. His use of contrast adds complexity to the overall effect. He is not one to choreograph a step for every musical beat, but neither does he tend to work against the music as some do. His impulses are musical, and he can bring out unexpected or hidden meanings that give his dances a fresh quality.

In Home Front, Rioult takes his cue from the fact that Ravel dedicated each movement of Le Tombeau de Couperin to a comrade who fell during WWI. The graceful opening music accompanies a group of four women, whose lyrical movement with a motif of fluttering hands recalls the work of early modern dance formalist Doris Humphrey. Then comes a dance for three men whose motions are almost mechanical, with clenched fists and an odd wiping or brushing gesture. A woman in red probably is meant to symbolize the dead comrades. But the piece is not gloomy and the flirtatious finale captures the joyous spirit of the music.

In Bolero, set to the eponymous score, Rioult has mirrored the repetitive structure of the music. He has his dancers move with a series of semaphore-like arm gestures while a single dancer in a spotlight responds to the main theme by performing a slow sequence dominated by arabesques. As the musical theme is repeated, a different dancer assumes the spotlight until everyone participates in the frenzied finale.

Rioult attempts to portray &#147;vulnerability in the face of death….a symbolic journey through darkness to light&#148; in Prelude to Night. It is clearly an homage to Martha Graham, with Rioult and Joyce Herring (in the central role of the woman who faces death) as the focal characters. Martha Graham had her unique way of synthesizing myth and psychology, probing people’s sexual impulses and motivations. Rioult&#146;s use of symbolism seems obvious, perhaps because it does not have the intensity that Graham was able to convey. Also, the music (three short selections, including Alborada del gracioso and Pavane for a Dead Princess) does not have the driving force that made Graham&#146;s dances so memorable&#151;it is too nice. The first of the three sections of the dance is set in a hospital, where the woman dons a hospital gown and is inspected by four male doctors. The phallic sculptures on the stage convey the wrong impression, bringing to mind a mental ward because of their sexual connotation andundermining Rioult&#146;s intentions for the rest of the dance, so that it becomes an examination of sexual repression rather than a battle for life.

Throughout the program, the work of lighting designer David Finley added immeasurably to the total effect. His designs allow the dancers’ movements to be seen clearly and contribute significantly to the mood and effect of every piece.