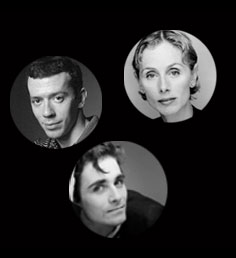 For the final program of the 2003 season, SFB Artistic Director Helgi Tomasson took a gamble in presenting three new works. The risk paid off handsomely in a winning program.

The most charming ballet came in the middle. Alexei Ratmansky&#146;s Le Carnaval des Animaux (The Carnival of the Animals), set to the eponymous score by Camille Saint-Sa�ns, matches the wit of the music with clever choreographic ideas and inspired costumes by Sandra Woodall.

From the surprise beginning when a supine lion comes to life, and throughout this menagerie of birds and other creatures, Ratmasky has created clever miniatures that are performed with flair by the SFB dancers. Just as Saint-Sa�ns&#146; music incorporates famous tunes (notably those by Rossini and Offenbach), Ratmasky quotes Swan Lake and movement cliches for comic effect. He has even turned the well-known "Dying Swan" sequence into a wry comedy.

The swan (Katita Waldo) executes the famous Fokine choreography while the corps on stage comments on her movements. This is no longer the sentimental showcase popularized by Anna Pavlova, but an integral part of a very funny ballet. Waldo was also given the assignment of personifying a jellyfish, sporting one of Woodall&#146;s most imaginative costumes, in a sea of turtles. Such gently daffy ideas lifted this ballet out of the ordinary.

Special mention goes to Amanda Schull as the elephant, whose routine would not be out of place at a Miss America talent competition. She seemed oblivious to the deliberately foolish steps she had to perform&#151;which she did with aplomb. Guennadi Nedviguine (a horse) shone with his high, clear beats. And a trio of birds that darted about like avenging mosquitoes at the beginning, later becoming a quartet reminiscent of Petipa&#146;s avian creations, were danced winningly by Brook Broughton, Maureen Choi, Pauli Magierek, and Joanna Mednick. This piece would be a great introduction to the ballet for anyone, especially children.

Former SFB dancer Julia Adam, whose ballet Sleep was a big hit a couple of seasons ago, has scored another success with Imaginal Disc. Adam finds inspiration in unusual material. This time it is the development of an egg through the stages of caterpillar, chrysalis, and butterfly. While this sequence of events can be recognized and followed in her ballet, the dance works as something more. It is a sweet examination of relationships, presented with interesting movement ideas.

She has again turned to composer Matthew Pierce (brother of SFB principal dancer Benjamin Pierce&#151;who created the scenic design and collaborated with Christine Darch on the effective costume designs) who did the score for Sleep. Adam intention to capture a feeling of American folklore in this ballet is well realized. Pierce&#146;s melodic score, sounding occasionally like Copland, includes a mandolin (or was it a banjo?) to emphasize the folk angle. The first movement is also deeply indebted to Pachelbel&#146;s Canon, the passacaglia structure of the music serving the folk-like quality of the movement.

Adam uses held poses and stiff dipping movements that create a world of their own. Her patterns, and the segregation of men and women (there is a central couple and a corps of five men and five women), is reminiscent of folk material. She makes artful use of a long piece of diaphanous cloth that hides different groups of performers and then becomes the wrapping of the chrysalis. Leslie Young (to whom Adam gave a special dedication) and Ruben Martin danced the central couple with a lack of pretension and directness that imbued the entire work.

The talented and evidently bumptious Stanton Welch came up with Tu Tu, which closed the evening. It is in a long tradition of ballets that satirize ballet. In this case, the target is the Oriental excesses of Petipa (La Bayadere, for example). With women in stiff tutus and bare midriffs, and men wearing only striped bathing trunks, it was like watching Beach Blanket Party Goes to Asia.

Set to the music of Ravel (the piano concerto in G major), there are three central couples, each different from the other in movement style. Vanessa Zahorian and Joan Boada began. When the curtain rose Zahorian was alone on stage in a column of light. She danced like the ballerina from Le Corsaire on speed. The slow second movement featured Muriel Maffre and Parrish Maynard, dancing alone more than together. Maffre seemed like a doll coming to life, discovering the capabilities of her limbs. As the movement came to a close with her alone on stage, it was evident how much she understands the power of stillness. This was followed by the swift third movement, led by Yuan Yuan Tan and Damian Smith, which seemed a Petipa parody.

Welch is not the first choreographer to be taken in by the Ravel concerto. Its appeal is evident: the use of jazz (still a new sensation when this concerto was written), the seductively attenuated second movement, and the finale that bristles with energy and ends with a bang. But it is difficult to capture in movement. Even Jerome Robbins was not entirely successful when he used the music for In G Major. The piece was fun to watch, however, and the company performed it with high energy.