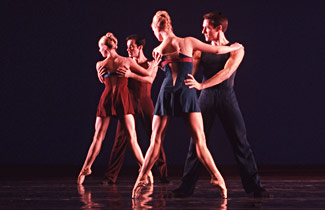 Images can hover and settle in the mind after a night of ballet, but music, which is at the core of the choreographic impulse, has its own half-life in memory. Such is the ephemeral value of the two forms together, music and dance–they can create the most sublimely fleeting audience experience, a fragile transcendence. It&#146;s one reason to see dances again and again.

San Francisco Ballet offered three dances in its latest program. A romantic piece by Jerome Robbins explored the nocturnes of Chopin in In The Night, two days after the Hassidic Sturm und Drang of his Dybbuk debuted on the same stage. It was a huge contrast, and a fascinating opportunity to see two aspects of the same brain expressed through the bodies of the superb San Francisco dancers.

Three couples took turns portraying love or at least relationships in the 1970 piece, first presented locally in 1985. The passions of the composer matched the talents of the choreographer best in the second pas de deux, featuring Muriel Maffre and Pierre-Francois Vilanoba. Less fiery than the third Opus, featuring a reliably dramatic Lorena Feijoo and the strong but subtler Yuri Possokhov, Maffre and Vilanoba&#146;s section had a kind of underplayed wisdom to it. There were moments that were exciting, like the fluttering bourres performed upside down by Maffre, but the main satisfaction came from the union of melody, mood, characterization, and movement. The third couple, Nutnaree Pipit-Suksun and Stephen Legate, needed more help from the pianist, Daniel Waite, whose playing seemed subdued. Their choreography featured drop-to-the-knees intensity without a hint of musical sforzando. Of the three couples, they seemed the least likely to succeed together in life.

Rush, by Christopher Wheeldon, which was new at the Edinburgh Festival in 2003, new on stage in San Francisco last season, and new this year by virtue of its amazing performance, offering Katita Waldo and Damian Smith the opportunity to create something unforgettable. After a predictably speedy, crowded first movement, full of spatial surprises, Waldo and Smith emerged for the slower, more moody second. This lengthy choreographic investigation offered a perfectly in-sync combination of fresh partnering ideas by Wheeldon and amazingly poised, passionate dancing, especially by the ballerina.

Wheeldon, British dancer-turned choreographer, now in residence at the New York City Ballet, has the knack for turning classical vocabulary just slightly on its ear. In the faster first movement, he seemed not to be creating dance to go along with the music, Bohuslav Martinu’s Sinfonietta La Jolla for chamber orchestra, played deliciously by the orchestra under the direction of Andrew Mogrelia, as much as harnessing the energy the music unleashes, and having his own say. That&#146;s the sign of a brilliant choreographer, the confidence to venture in and out of the sway of music, not to become enslaved, no matter how "beautiful" it is.

Prism, on the other hand, shows Helgi Tomasson at his obedient best, not chained to or humiliated by almighty Beethoven (the Piano Concerto No. 1, with a typically superb soloist in Roy Bogas) but inspired by him, greatly. The excitement of Prism comes from the dynamic staging for 29 dancers, and the creative way that Tomasson keeps unveiling layer after layer of ideas and expression. What builds from an unsymmetrical opening, all groupings of three, into a shadowy stage-full of dancers backing up Yuan Yuan Tan and Damian Smith, into a swirling conflagration of both these groups and a virtuoso-in-black, Gonzalo Garcia, is a piece of work that represents the spirit and the exposition within the musical score perfectly.

At the heart of the piece is a sublimely romantic pas de deux between Tan and Smith, which offers some of the most stunning delicacy and lyrical abandon seen on stage this year. Who needs Romeo and Juliet? Tan was absolutely breath-taking, and Smith matched her softness with solid, centered, no-nonsense partnering. The finale, with a mass of movement swirling around a single, still figure, Garcia, is satisfying musically, kinesthetically and emotionally. Tomasson, Beethoven and a stage filled with talent combine to create choreographic synchronicity.